The Wedding is On: Bishop Noel Jones Makes Public Proposal to Longtime Girlfriend 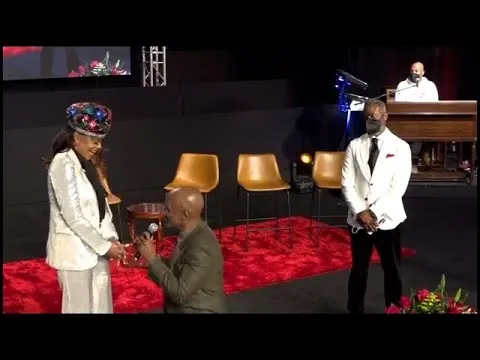 Bishop Noel Jones, the senior pastor of the City of Refuge Church in Gardena, California and formerly one of the cast members of Preachers of L.A., has decided he is finally ready to marry his longtime lady love, Loretta.  The decision comes after being in a relationship with his longtime partner for twenty-eight years and was made public during a recent church event.

Standing center stage, Bishop Jones started to talk to the congregation about what it might look like when he gets older before surprising his congregation when he said, “I decided that I’m gonna get married.”

He continued to question several other things he might have to give up. Then changing his tone, he said, “But then when I look at her…(now speaking directly to her), should you have to push a wheelchair when I can’t walk?  Should you have to deal with an old man when you have had many suitors who were young?  Should you have to listen to a man who was intoxicated with the exuberance of his own verbosity or who is set in his ways?

Pausing for a moment, he added, “If I keep on thinking about these shoulds, I won’t get this thing done.”

Bishop Jones then reached for a cracker jack box and pulled out a ring.  Holding up the ring, he announced, “I got away from all of the shoulds and I’ve decided simply to say”, going down on one knee, and placing the ring on her finger, “Will you marry me?”

She accepted the ring and as she began to receive hugs from friends and loved ones, Jones said, “What did you say,” and she replied ‘yes, to which he proclaimed, “I’m getting married.”