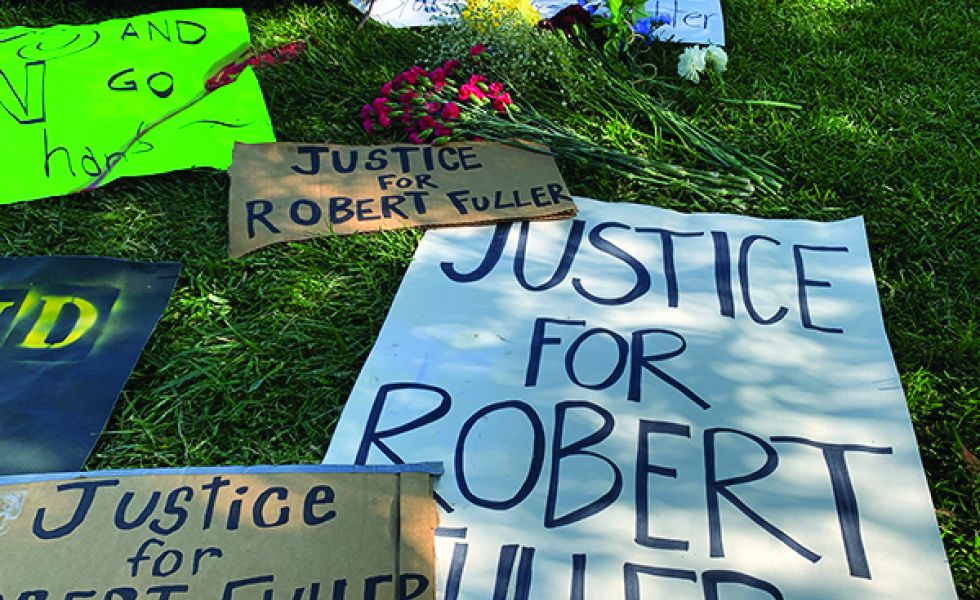 Fuller, 24, was found hanging from a tree last Wednesday less than a fortnight after another black man was found dead in a strikingly similar manner about 45 miles east of Palmdale.

But if that initial tragedy wasn’t enough, a second tragedy occurred when the half brother of Fuller, was killed by Los Angeles County sheriff’s deputies in a shootout Wednesday, officials say.

“This afternoon I had to notify the sisters of Robert Fuller that their half-brother Terron Jammal Boone was killed by Los Angeles County sheriff’s deputies in Kern County,” said Hicks in an email released to the press.

Now, both deaths are under investigation.

“The system isn’t built for us, and it’s got to change,” said National Action Network’s Jonathan Moseley. “That’s why we have representatives across the country so that they can have some sort of comfort in knowing we’ve got their back.”

Asked if he believed the official report from the sheriff’s department that “Mr. Fuller, tragically, committed suicide,” Moseley immediately and unequivocally answered, “I don’t believe it. African-Americans do not commit death by hanging. Under no circumstances. It’s just not our culture.”

At the protest for Fuller that was hosted by the Let Me Catch My Breath movement, people voiced concerns that Fuller may have been lynched and believe investigators failed to follow proper procedures by considering alternatives, such as the possibility of a hate crime.

The proof is all around them some said.

Pointing out that racism is rife in the high desert city where confederate flags hang from front poles in people’s yards, on bumper stickers and T-shirts.

“A significant number of white people that are here are just southerners who moved to California for a quote-unquote, better way of life,” said Moseley. “That’s why you have the same Jim Crow attitudes in pockets of areas like here.”

But the Los Angeles County Sheriff’s Department said there was no evidence of foul play in the death of Fuller and deemed it a likely suicide based on preliminary findings but vowed to continue to look deeper into the case.

“Investigators have been in contact with Mr. Fuller’s family and are continuing their investigation into the circumstances surrounding Mr. Fuller’s death,” Palmdale officials wrote in a statement.

Still, the message of Thursday’s gathering echoed those taking place around the country: Stop police brutality against the black community. Organizers said the protest was originally meant to honor George Floyd, an unarmed black man killed last month while in the custody of Minneapolis police. But they decided to hold a peaceful gathering to remember Fuller because he was found dead hanging from a tree in a park in the city.

They filled the Palmdale park holding signs that read “Black lives matter,” “Say their names” and “I can’t breathe” as Bob Marley’s song “War”, and Fela Kuti’s “Water No Get Enemy” played from a loudspeaker.

“We lost a brother who should still be with us,” said Isabel Flax, one of the protest organizers who urged the crowd to channel their energy as a collective front united on one accord.

“We might never get justice in Robert Fuller’s case because we possibly won’t ever know who killed him, and so justice for us is going to be changing policy.”

Arthur Calloway, another one of the organizers and speakers, said the city would’ve responded with the full weight of law enforcement, had a police officer been found hanging from a tree.

“They’d had been 600 cops scouring the neighborhood,” he said. “Kicking down doors and getting every ounce of video they can scrape. Doing everything that they can to find out who did it.

“But when Robert Fuller died, it was considered a suicide immediately. It’s indicative of a system that does not value all life the same.”

And this added Calloway, “is why it’s important to vote.

Stressing that part of policy change is making sure people can be put in office and push the reforms that extend to the black community. “We need to go out and vote because that is what’s going to stop us from getting lynched on a tree.”