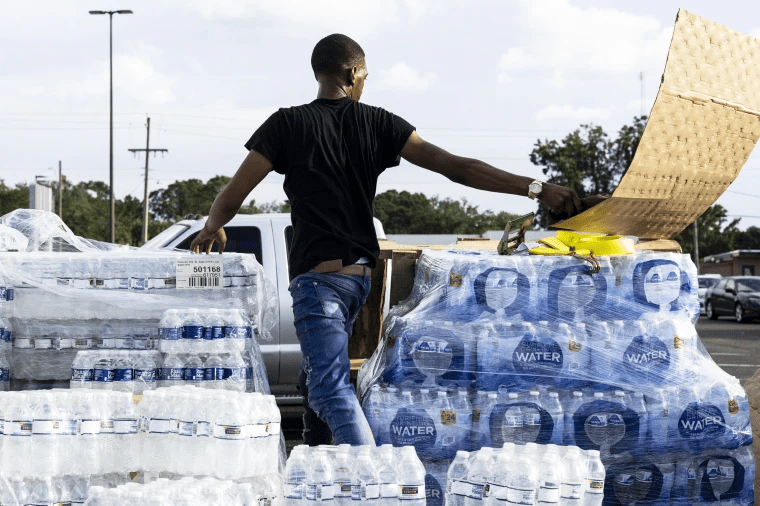 Staff
“Our people need water and we’ve got to do something about it”, Pastor Joshua Daniels announced to his congregation upon seeing news reports about the Jackson, MS water crisis that left residents of the city without running water.
Following Daniel’s announcement the church’s missions ministry, Zion Cares, sprang into action to launch “Water for Jackson”.
For the last three weeks members have been bringing cases of water to the church to be delivered to the city that had declared a state of emergency, with approval of that declaration by President Joe Biden.
Mount Zion is partnering in the effort with Unity Fellowship Baptist Church in Jackson, where Orlando Franklin is the Pastor.
Once Pastor Daniels announced Mount Zion’s efforts, several churches and individuals called to join in the effort.  The first call was from Pastor DeNon Porter of Greater Ebenezer MBC in Los Angeles with a donation of $3,000.00.  Pastor Geremy Dixon and Center of Hope followed, and Bishop Kenneth Ulmer and Faithful Center Bible Fellowship called to lend their support as well.
Now that all of these Pastors and their churches are participating, the “Water for Jackson” movement has gone from 1 eighteen-wheeler to 2! The trucks will be loaded at Mount Zion and prepared to pull off, Saturday, September 17th at Noon.
Pastor Daniels recently interviewed with WOAD on-air radio personality, Percy Davis, sharing, “When God’s people need help, God’s church ought to spring into action”.
Earlier today, the boil-water advisory that had been in place in Jackson for seven weeks— was finally lifted.
“We can now announce that we have restored clean water to the City of Jackson as of today,” Governor Tate Reeves declared, while adding that the system was still imperfect and “we’re going to address issues throughout the duration of the state’s response.”