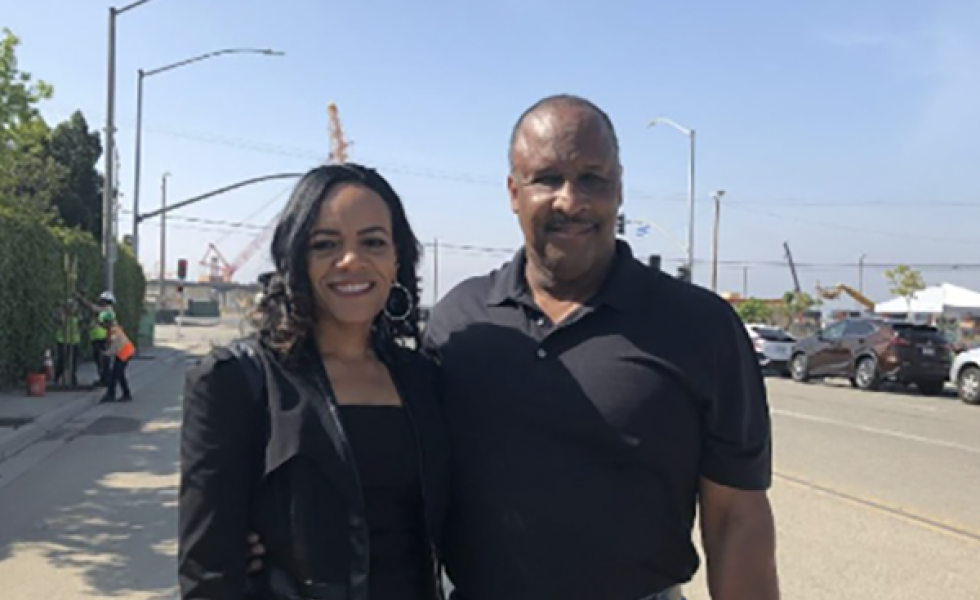 Inglewood Mayor James Butts’ former executive assistant Melani McDade-Dickens has filed a 22-page lawsuit against Mayor Butts and the City of Inglewood after she says she endured years of harassment and abuse before she was stalked and fired after ending their nine-year relationship.

“There’s a virus raging on the ninth floor of the city hall in Inglewood and that virus has nothing to do with COVID. That virus is promoted by fear. That virus is promoted by intimidation and hopefully, this lawsuit will be the first step in finding a cure,” said Attorney Carl Douglas of Douglas Hick Law in a press conference announcing the lawsuit. McDade-Dickens is also represented by Maryann P. Gallagher.

McDade-Dickens previously filed a claim for damages in June of last year. It was rejected by the City of Inglewood on July 29 which allowed her to move forward with a lawsuit against the City and Butts.

“Here I am wanting to restore my name and my dignity,” she said at the conference.

The lawsuit outlines how McDade-Dickens met Butts in 2010 when he still worked as Chief of Los Angeles Airport Police and she volunteered on his mayoral campaign. She then joined him as an office manager before she worked through the ranks to become an adviser on his strategy committee. It was during the campaign that the two began forming a consensual romantic relationship and after securing his win, Butts invited McDade to join his administration as Executive Assistant.

As Mayor Butts became a “tyrant” and “monster”, says McDade-Dickens. The lawsuit decibels Butts as an aggressive man who not only demanded sex at the office but would punish her by shouting and harassing her if she did not engage. He would also encourage and intimidate others to shun her, adds the lawsuit.

McDade says she attempted to end their relationship on March 5, 2018. A move that she says enraged Butts and marked the start of his stalking.

“On more than a dozen occasions, Butts terrorized McDade’s family showing up at her home, unannounced, in the middle of the night, gaining entry into her home by using her garage door opener that he refuses to return when she broke up with him,” the lawsuit says.

It also says that McDade suspected Butts had added a tracking device to her car after he would appear “out of nowhere” on her personal time every other Friday when Inglewood City offices were closed.

An emotional McDade at the press conference says she nonetheless continued working at the office saying she loved her job.
“I showed up at work every single day, I didn’t miss an assignment, I was at every meeting that he eventually allowed me to be in,” McDade-Dickens said. “I still maintained all of my daily activities, I never slacked. I would close my door sometimes and cry and bite my tongue, but I compartmentalized my work and my relationship.”

The lawsuit names other city leadership including City Manager Artie Fields and Human Resources Director Jose Cortes who were both supposedly aware of the harassment and yet did nothing to stop it.

McDade says Butts, angry at her success without him, directed Cortes and Fields to exclude her from the executive meetings which she had been attending for years and to strip her of regular duties before ordering them to order an armed guard to escort her from the ninth floor offices and suspend her, a move that made headlines.

“After she dumped him, the mayor retaliated against her and set upon a course to ruin her reputation, and, using two puppets he employed, to destroy her career,” said Douglas at the press conference.

“Both men reward their friends and punish their enemies. Both men treat themselves like they were king or dictator. And both men need to be shown even an elected official is not about the law,” he said.

“The Mayor categorically denies any and all allegations of coercion or harassment,” said Mira Hashmall, an attorney for the city, in a statement. “This complaint, full of salacious fabrications, is a tactic designed to draw attention away from Ms. McDade’s wrongdoing by smearing others. It will not work.”