Demonstrators Take Their Protest of Tigrayan Genocide to Little Ethiopia 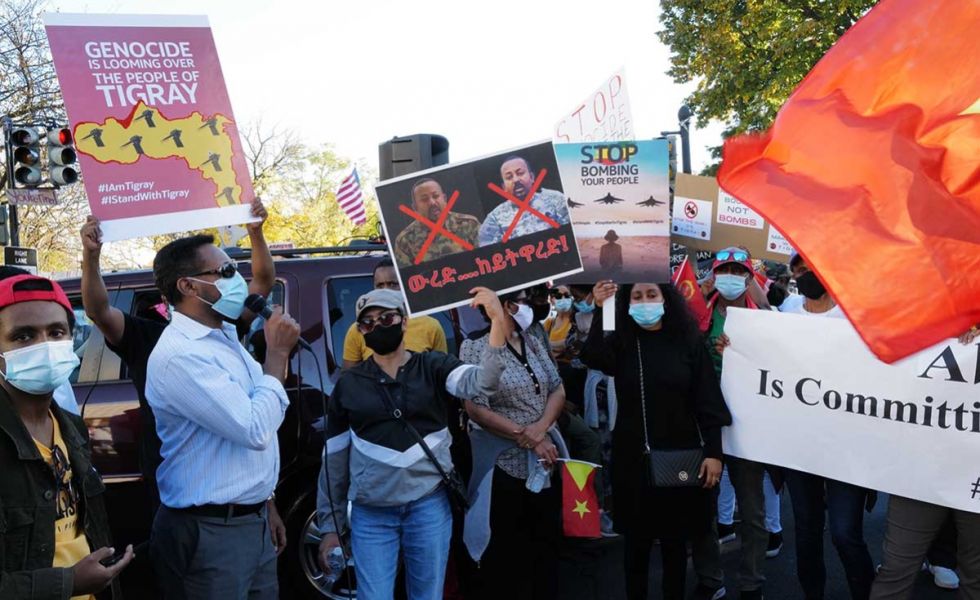 In what is the latest in a series of demonstrations against the ongoing genocide in Tigray, Tigrayans took to the streets in Little Ethiopia —both on foot and in automobiles— to protest the ongoing conflict in Ethiopia’s northern Tigray region where government forces have reportedly been executing civilians.

A caravan of cars filled with protestors paraded up and down Fairfax Boulevard which is lined with Ethiopian and Eritrean restaurants in the Mid-Wilshire district of Los Angeles known as Little Ethiopia— between Olympic Boulevard and Whitworth Drive— as sidewalk diners, pedestrians and shoppers looked on.

Protesters—who have started a petition on change.org—are asking that the U.S. government take “a deeper look at this act of domestic terrorism and its possible connection to the Ethiopian government that continues to blame every Tigrayan diaspora for the country’s tarnished global image as a “genocidal and brutal regime.”

“The federal government declared war on the people of Tigray on November 3rd, said Abbi, a Tigrayan Ethiopian, who was one of nearly 100 protesters. “For more than five months, they’ve been killing people. Over 70,000 people have fled to the neighboring country, Sudan. 4.5 million people are starving and then 2.5 million have been displaced. They’ve been committing atrocities and crimes against humanity…and war crimes. So the Ethiopian government and another neighboring country, Eritrea…they’ve been killing our people and some of the people here (pointing to local restaurants and shop owners) have been supporting that.

One man was arrested after having brandished a gun at the peaceful protesters. The suspect was believed to be an ardent supporter of the Ethiopian government and the war in Tigray—had spewed hate speech at the protesters.

Over the last month, reports of executions and mass rapes have surfaced in the mainstream news. U.S. Secretary of State Antony Blinken has described acts carried out in the region as ethnic cleansing and the top United Nations officials have called for a stop to indiscriminate and targeted attacks against civilians in Ethiopia’s northern Tigray region, particularly calling out reports of rape and “other horrific forms of sexual violence.”

Ethiopian government troops have been accused of joining forces with soldiers from neighboring Eritrea to brutalize and gang rape Tigrayan women. In one case, a woman’s private parts were stuffed with nails, stones and plastic.

“It is essential that an independent investigation into conflict-related sexual violence in Tigray be initiated, with the involvement of the U.N. Office of the High Commissioner for Human Rights,” the officials said in a statement.

“The United States is gravely concerned by reported atrocities and the overall deteriorating situation in the Tigray region of Ethiopia,” Blinken said. “The immediate withdrawal of Eritrean forces and Amhara regional forces from Tigray are essential first steps.  They should be accompanied by unilateral declarations of cessation of hostilities by all parties to the conflict and a commitment to permit unhindered delivery of assistance to those in Tigray.  The United States is committed to working with the international community to achieve these goals.  To that end, USAID will deploy a Disaster Assistance Response Team to Ethiopia to continue delivering life-saving assistance.”