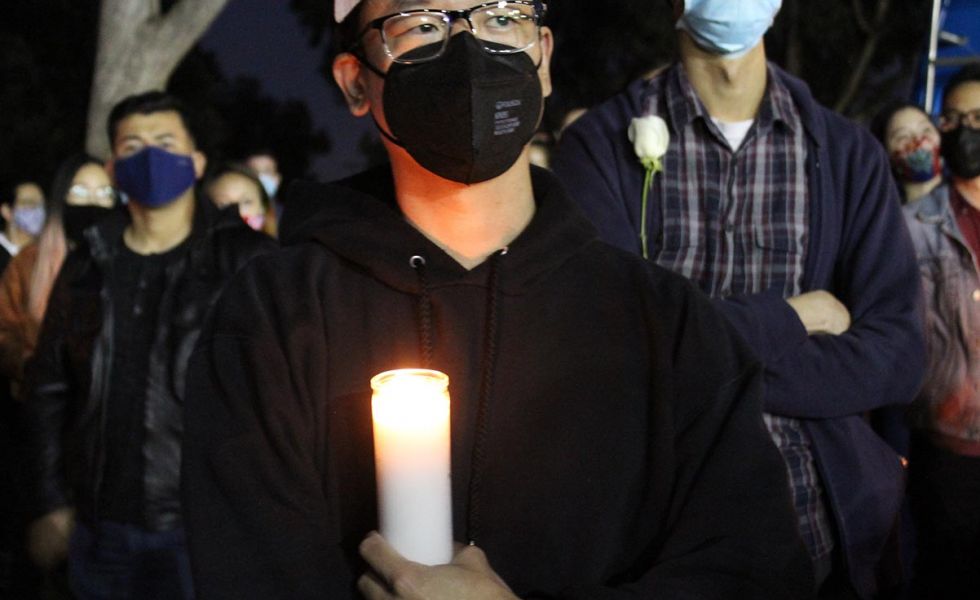 A Black Lives Matter – South Pasadena activist came together with the San Gabriel Valley community to hold a “Stop Asian Hate” candlelight vigil on Saturday evening and called for the ongoing attacks on Asian Americans to stop.

The vigil was held at Almansor Park in Alhambra, four days after a lone gunman went on a shooting spree at three Atlanta-area spas that left eight people dead, including six Asian women.

“Many of my days are extremely full,” Fahren James, the South Pasadena Black Lives Matter activist, told the hundreds of people gathered to honor the shooting victims. “But it is important I came here today to stand in solidarity with the AAPI (Asian-American Pacific Islander) community, who are some of my closest supporters.”

She did not mince words and spent a considerable amount of time highlighting the tense relationship between Blacks and Asians in America, saying to the crowd of masked people – primarily Asian – that now was the time to work together instead of perpetuating negative stereotypes.

“There’s no way,” she reiterated. “I would miss coming here to stand in solidarity with you even though my overwhelming experience in the [Asian-American] community has not been great. But I came here today dressed in a hoodie and chucks on my feet to show you that I am human and care about everybody. The Black Lives movement is not just about Black lives because what we’re asking for is going to help every one of us.”

“I was impatient,” she said. “I want this to happen now. I didn’t want to wait for someone to organize an event. We need a sense of community where we feel validated and are here for each other. Having people from the community speak gives us a space to heal.”

Like many Asian-Americans, she is still reeling from the Atlanta mass shooting. The suspect, identified as Robert Aaron Long, faces multiple counts of murder and aggravated assault.

“I think I’m talking for a lot of people when I say we were traumatized learning about the shooting. It’s something we’re going to continue to process over time,” Hang said.

According to several recent studies, since the coronavirus pandemic started a year ago, hate crimes against Asian-Americans in major U.S. cities surged by nearly 150 percent.

Jireh Deng, a student at Cal State Long Beach, said she was frustrated the media hadn’t been more proactive in covering the social crises last summer as a teachable moment to discuss anti-Black racism.

“As someone who is a student journalist, I need to ask the media where were you when we had Black Lives Matter protests?” asked Deng. “Why is it that you only show up to these types of events? Why do we have stereotypes that label certain communities as more dangerous when they show up to combat racism?”

Deng underscored that dismantling “white supremacy” would require connecting the Asian community’s struggles to those of the African-Americans who’ve had a long history of protesting against racial injustice.

She called for a collective effort to end anti-Asian hate and violence.

“The fact is,” she said. “Violence against Asians isn’t going to stop if only Asian’s care about it. Because we learned through Black Lives Matter that had Black people only cared about Black violence, we’ll never address anti-Blackness in this country. We need solidarity and allyship.”