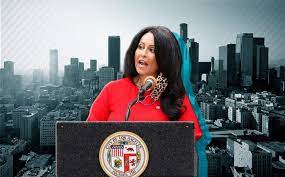 In a strongly worded letter dated February 7, Attorney John Sweeney—who has been retained on behalf of Tenth District residents and the SCLC—informed members of the L.A. City Council and its president, Nury Martinez, that they were prepared to take legal action unless they receive “immediate and satisfactory resolution” of their concerns regarding suspended Councilmember Mark Ridley-Thomas and the disenfranchisement of their votes.

Among those concerns is that Ridley-Thomas’ seat not be declared “vacant” prior to his trial and that no actions be taken to prevent the Councilmember from returning to his seat upon an acquittal.

Wrote Sweeney, “We want to be very clear that our primary goal is to ensure that the person these constituents overwhelmingly elected—not anyone you independently decide to appoint for your own reasons—continues to represent their District if, as we expect, Councilmember Mark Ridley-Thomas is acquitted of the charges against him.”

The letter is one of a number of letters sent in recent days prompted by reports that Council President Nury Martinez was set to provide leadership to the Tenth District with a recommendation of an appointment to serve out Ridley-Thomas’ term.

A separate letter signed by CD10 residents and district block club leaders referenced a statement made by Martinez’ in a local newspaper that she had met with ‘residents and leaders of the community in moving forward with an appointment’ and sought specifics and transparency relative to the individuals with whom she’d met, particularly given the revelation that Martinez hadn’t sought the input from the only other two Black members of the City Council, Curren Price and Marqueece Harris-Dawson.

The group, dubbing themselves as “Voices of the 10th” also respectfully requested a meeting with Martinez before “any action is undertaken”.

Just one week earlier, faith leaders had requested a meeting with Martinez to discuss the matter and on February 3rd, State Senator Steve Bradford and Assemblymember Mike Gipson penned a letter to California Attorney General Rob Bonta, asking him to weigh in.

“We respectfully request an opinion on the constitutionality of actions undertaken by the Los Angeles City Council regarding the vacancy in the Tenth City Council District seat and the equal protection/due process rights of elected officials suspended without pay pending the outcome of a judicial proceeding,” they wrote.

“With potential action to fill the vacancy the Council created imminent, it is appropriate to determine the legality under the California Constitution, of the Council’s authority to: (1) “suspend” the incumbent without benefit of any evidentiary proceeding and (2) declare the 10th District seat “vacant” based on actions that appear to have violated the sovereignty of CD10 constituents and Ridley-Thomas’ right to due process.”

Included in the questions of law they asked Bonta to weigh in on was whether or not the California Constitution or existing employment law extends due process protections to elected officials who are “suspended” from office without pay for alleged criminal activity related to official conduct pending the outcome of a judicial proceeding; and if there is a conflict between the aforementioned provisions of the City Charter and the California Constitution.

The issues raised have resulted in another round of media coverage from local newspapers including the L.A. Times. A headline from a Citywatchla.com read, “Nury Martinez’ Power Grab on the Backs of South L.A. Residents Must Be Stopped.”

“Where is the transparency?” wrote columnist Bridget Gordon, a resident of Jefferson Park, which is located in CD10.

“South L.A. residents have a long and storied history of civic engagement and are increasingly aware of what is at stake here. But residents citywide should be alarmed by what’s occurring as it will have consequential implications…”

Amidst growing calls for accountability, Martinez was set to meet with faith leaders later today.