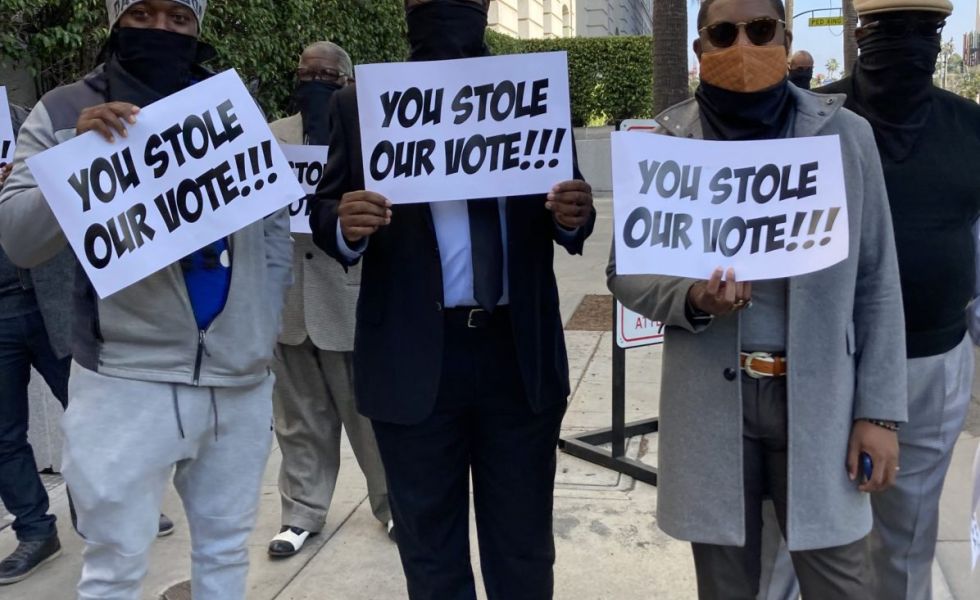 Activists and Tenth District residents were once again at City Hall to protest the ousting of Councilman Mark Ridley-Thomas, which they say disenfranchised them and left them without adequate representation.

“You stole our votes”, they chanted as council members entered the City Hall parking garage reserved for members of the L.A. City Council and other officials.

“We’re back out here because justice continues to elude us in the Tenth Council District and for the way that they treated Mark Ridley-Thomas,” said SCLC President William Smart. “We intend to maintain these protest with vigilance and with power to let them know what they did was wrong.

“We want to make sure that those city council members who have created this void in our district know that we’re not turning a deaf ear or closing our eyes to what’s happening. It’s a travesty and we want to show solidarity in our community. Who’s going to speak for us?”

The lapse in leadership on issues facing the Tenth District is what most concerned Pastor Edward Anderson.

“I’m a concerned resident of the Tenth District and we’re lacking representation on the city council while decisions around homelessness, redistricting…decisions about what happens to Leimert Park are happening. We don’t have a voice at the table, but yet we voted, we pay our taxes, and we deserve representation.”

Due process was another key issue for protestors.

“We feel that our voice was taken away without due process,” said Pastor K.W. Tulloss, president of the Baptist Minister’s Conference. “The city council was premature in removing Mark Ridley-Thomas from office. He should be reinstated and the issue for which he is being investigated should be treated fairly. Simply put, we’re here to let the council members know that we haven’t forgotten their premature action to remove an elected official in a manner that appeared to be politically motivated and we won’t forget those who stole our votes.”