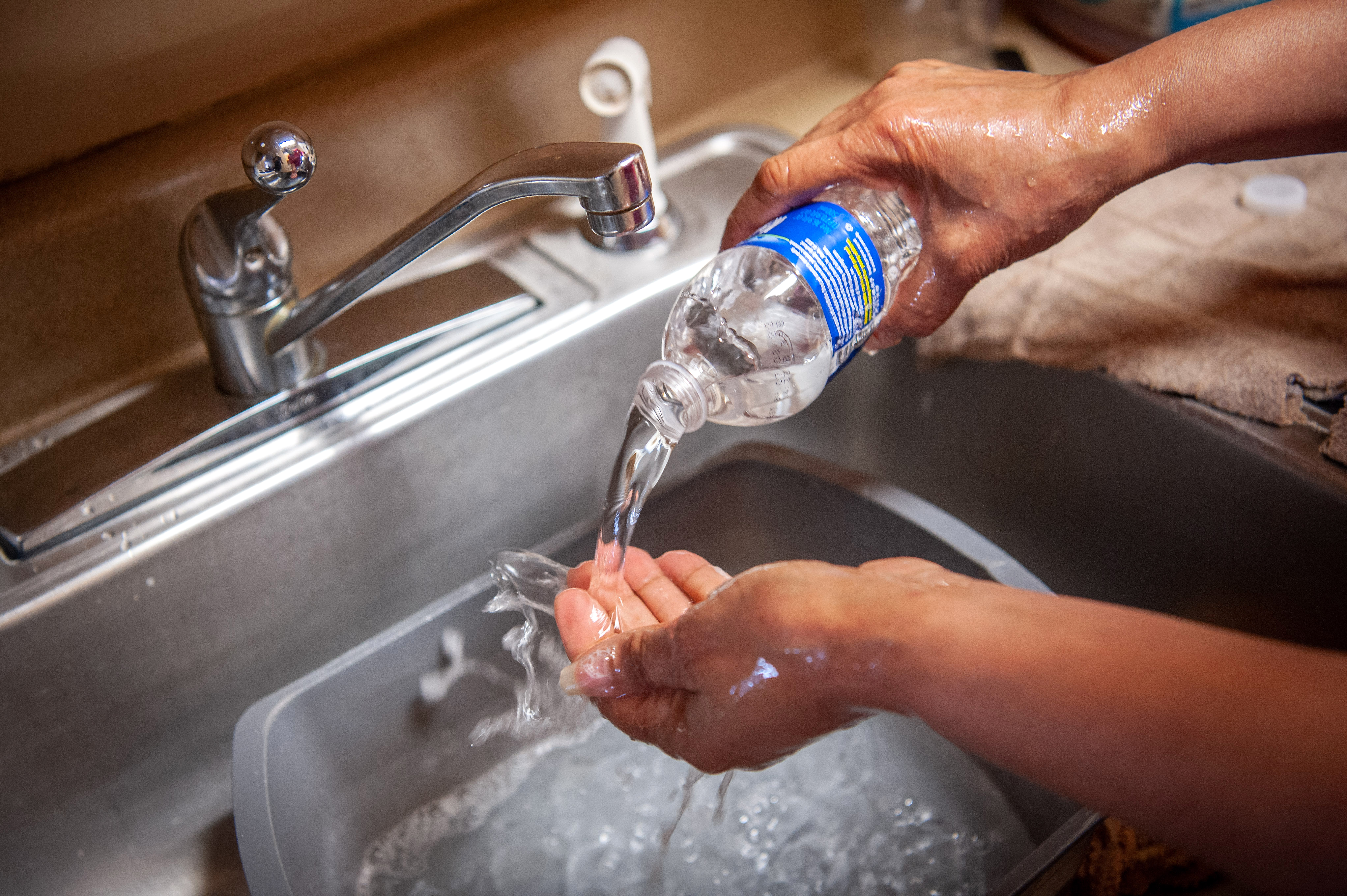 Like much of the western United States, California is in the midst of what experts are calling a “megadrought”, claiming that the last 22 years has marked the driest period since records started being kept nearly 1,200 years ago. While lack of water may affect all citizens equally– and as lawmakers in the state scramble to figure out long term solutions to make up for the state’s dwindling water supplies– the ability to provide reliably safe water is an issue that overwhelmingly affects our states most vulnerable populations including people of color.

Despite California being the first state in the union to declare that “every human being has the right to safe, clean, affordable, and accessible water adequate for human consumption, cooking, and sanitary purposes”, as stated in legislation passed in 2012 under Governor Jerry Brown, a blistering audit recently released by acting State Auditor Michael Tilden confirms that California is failing many of its citizens on their right to safe, clean water.

According to Tilden’s report over 370 water systems across the state which serve more than 920,000 Californians were not meeting water quality standards as of December 2021. The report states that more than two-thirds of these systems are located in disadvantaged communities with significant financial need, forcing residents who can least afford it to “purchase more expensive bottled water for drinking and cooking purposes”, not to mention the long term negative health outcomes associated with being exposed to unsafe drinking water which include increased risk of liver and kidney problems as well as cancer.

All of which conjures up images of Flint, Michigan, where thousands lined up to get clean water after city’s residents were sickened after being exposed to dangerous levels of lead, and outbreaks of Legionnaire disease killed at least 12 people. And even more recently, Jackson, Mississippi where the city has been without potable running water for weeks and residents have been advised to shower with their mouths closed.

In L.A. County, the right for all communities to have equal access to safe, reliable drinking water is a major concern– as historically, wealthier and more established cities were able to lay claim to a greater stake in the clean drinking water supply.

Environmental lawyer Jennifer Hernandez, who runs the Land Use and Environmental Law Group at the law firm, Holland and Knight, explains how water deals made over a hundred years ago are negatively affecting unincorporated areas which are largely made of communities of color.

“Many of the smaller cities in L.A. County emerged after the major water deals were brokered, and those deals only served the bigger, wealthier cities that were organized to go after the water,” reports Hernandez. “Unincorporated county areas, which tended to have higher percentages of black and Latino residents and had local governments that were either just getting started or non-existent weren’t at the table when the big water pie was getting sliced up.”

Hernandez says the L.A. County water system as it is currently set up was working well until around the mid-seventies. Since then, a population boom of around 20 million along with the dwindling water supply due to extreme drought conditions has caused an inequity in the quality of water being supplied. The result is the larger, more economically stable areas getting a greater stake in the supply of fresh drinking water, and smaller areas left to try to find solutions on ways to create supply– including using treated sewage water.

“Right now, there is really only one important solution to water supply and that is to treat sewer water,” says Hernandez. “Of course, that’s pretty ridiculous but that’s the solution L.A. has accepted. It shouldn’t be the only solution for the folks of south L.A.– they should have the right to the same healthy and sustainable water as the wealthier and older cities.”

Adriana Renteria, Director of Public Participation at the State Water Control Board points to the racist policies of redlining and segregation directly contributing to the disparity in water quality across the counties.

“Many of them to this day still run their water district with their own people. You can imagine how hard it would be to manage a complex water system if you’re a volunteer, and that’s what is happening today.”

There are currently 205 separate water systems in L.A. County, each in charge of providing water for the connections in their jurisdiction. Some water systems, like the L.A. Department of Water and Power which serves 681,000 customers, are large and relatively stable and reliable– while smaller systems struggle to meet quality standards.

According to the State Water Control Board (SWCB)–the government agency tasked with overseeing the allocation of the state’s water resources for all purposes– small public water systems are often less resilient to natural disasters, such as drought and fire, have more difficulty adjusting to regulatory changes, and may struggle to fund infrastructure maintenance and replacement due to poor economies of scale and lack of staff.

One example of a small water system failing was in 2017 when 7,000 residents in the Compton/Willowbrook area complained about murky brown water with a foul odor coming from their pipes. The residents were all customers of the Sativa Water District whose aging pipes were leaching manganese into the water, along with failing wells and contaminated ground water.

Sativa serviced largely Black and Latino neighborhoods whose residents were predominantly low income. The County ended up dissolving Sativa completely and having the L.A. County Department of Public Works serve the area before it was eventually bought by Suburban Water Systems.

The joining of two or more water systems– with a larger system usually absorbing a smaller system– is called water system consolidation and according to Adriana Renteria, it can be a good solution to helping provide clean water to areas in need.

“Consolidation can be an effective strategy in providing relief for smaller water systems that are buckling under the pressures of lack of supply along with years of neglect and underfunding,” says Renteria. “The issue becomes finding incentive for the company to take on the costs– also some residents fear that their rates will rise overnight.”

“The fact that more than a million Californians can’t rely on clean water to drink or bathe in is a moral disgrace,” said Newsom. “This funding is critically important to addressing California’s long-standing safe drinking water issues, and I would like to thank the Legislature for working collaboratively to pass this solution.”

During its August 18, 2020 meeting, the State Water Board publicly acknowledged that the historical effects of institutional racism be confronted throughout government, directing its staff to develop a Racial Equity Action Plan which would include specific actions the State Water Board would take to address racial inequities, as well as metrics to track progress.

“With this action plan,” the report stated, “we envision a sustainable California where race no longer predicts where clean water is available or who has access to it.”

But in his April 2022 resignation letter to the California State Water Resources Board, Max Gomberg, a climate and conservation manager, said he believed that the administration had failed to address inequities in the water rights system, citing local groundwater agencies dominated by representatives of irrigation districts and agricultural interests which get the lion’s share of the state water resources.

“The people in charge of those agencies have the least incentive to move quickly,” Gomberg said. “They fully intend to run out the clock and fight any state attempt to come in and get into their business.”

With shrinking water accessible from the Colorado River and California in the midst of one of its most extreme droughts on record, the concern for racial equity is only exacerbated.

That’s where organizations such as Groundswell for Water come in, organizing campaigns aimed at ensuring water equity for communities of color across the L.A. area, and throughout California.

Groundswell is led by a coalition of local organizations and individuals who are advocating for new policies which enhance the delivery of water by supporting small water system operators throughout the state, many of which have been serving low income communities with unsafe water for decades.

“Groundswell was designed to pick up the water fight and deal with water equity as a social justice issue for communities of color,” says Robert Sausedo, President and CEO of Community Build Inc., a leading organization in the Groundswell coalition along with the Los Angeles Metropolitan Churches and the Southern Christian Leadership Conference, among others.

The organization has recently been involved in a lawsuit against the Bureau of Land Management, to make sure people of color have a seat at the table when it comes to creating water policy.

“Those from disadvantaged communities tend to be at the end of the value sheet when it comes to getting clean drinking water and we need to be at the table like everyone else– on the front end of the deal,” says Sausedo. “The people that show up and fight are more likely to be communities that are economically stable, which means they are the first recipients of any new water and leave communities of concern out of the loop. That’s why we have to raise our voices now and deal with this right now. No one’s going to look out for the rights of communities of color unless we do it ourselves.”

For more information and how to get involved, visit groundswellforwater.com

Is Your Water Safe?

If you are someone who is wondering whether your water at home is safe, there are several resources available for checking the water quality in your area.

According to Jeff O’Keeffe, Supervising Sanitary Engineer for the State Water Resources Control Board’s Southern California Division of Drinking Water, the first step in finding out about your water’s quality is knowing where it comes from.

“There are 205 community water systems in L.A. County alone so many times people don’t know how to go about finding that information,” says O’Keefe. “There is a tool on the SWCB’s website where you can put in your home address and find out which water system is providing you with water.”

From there, O’Keefe advises that you look up your water system’s annual Consumer Confidence report–which each water system is required to publish– and gives information about the source of your water along with summarizing details about the risks of contaminants found in the water, and accounting of the system’ sanctions to restore safe drinking water.

“For those who are billed customers, you receive a of the Consumer Confidence reports directly, but many renters never see them so it’s important to look it up,” says O’Keeffe.

The SWCB also has a tool available through its Safe Affordable Funding for Equity and Resilience (SAFER) program which monitors and identifies public water systems and domestic wells that are “at-risk”.

“On the SWCB’s website the SAFER program offers a dashboard where you can look up any community and see if they’re failing, or if they’re at risk and see how much funding we’re providing,” says Adriana Renteria. “For instance, in the east L.A. region there are a few at risk systems so you can use the dashboard to see where they are and if you will be affected.”