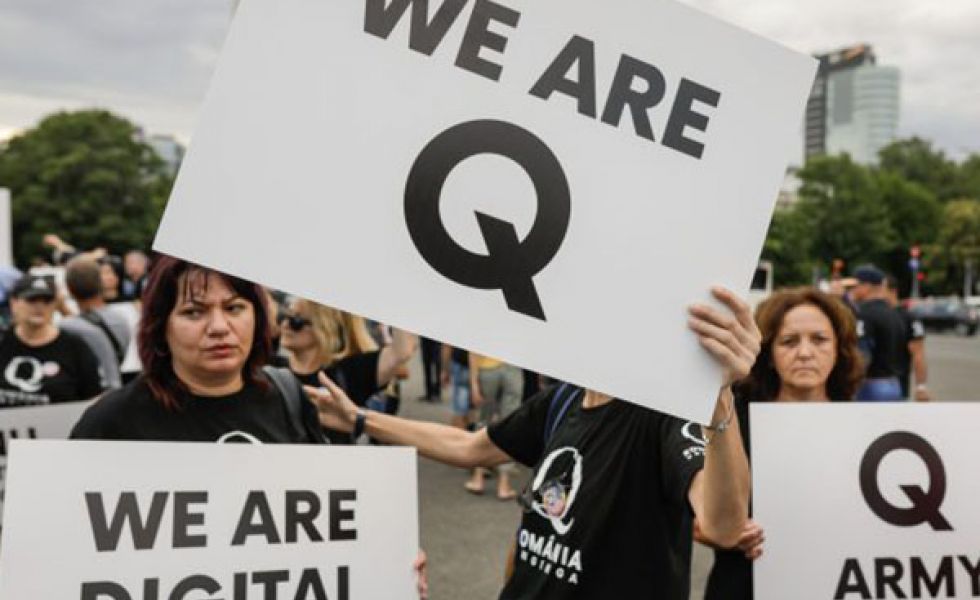 Manny Otiko | California Black Media
Some Americans had not heard about QAnon before a mob of President Trump’s supporters attacked the United States Capitol on Jan 6.

Believers in what experts call the QAnon conspiracy theory were among several far-right groups that invaded the Capitol and attempted to overthrow the government that day earlier this month. San Diego resident Ashli Babbitt, a U.S. Air Force vet who a Capitol Police officer shot during the chaos, was a QAnon follower.

Last week, three experts from different disciplines gave an hour-long briefing on the history and background of QAnon to a group of California journalists. The virtual meeting was organized by Ethnic Media Services.

According to the panel, QAnon is a loosely organized, mostly internet-based cult that floats several conspiracies that many of its followers believe. Prominent among them is this one: the government is controlled by high-level Satanists who drink children’s blood. The idea of elites drinking blood is tied to age-old anti-Semitic myths.

The group also sees President Donald Trump as their leader, the experts say, and they envision a day when their organization takes control of the government and execute the Satanists. QAnon is also allied with other far-right and White nationalist groups.

Meili Criezis, program associate at Polarization and Extremism Research Innovation Lab (PERIL) at American University in Washington, D.C., says QAnon grew out of a debunked conspiracy theory about pedophiles and former first lady and Secretary of State Hillary Clinton. The conspiracy theory alleged that one of Clinton’s staffers was a member of a group of pedophiles who kept children in the basement of a Washington, D.C. pizzeria. An armed listener of Right-wing talk radio host Alex Jones’s “InfoWars” stormed the restaurant to rescue the children only to find the business did not have a basement. He was arrested and jailed after shooting up the building.

But the myth of pedophiles in Washington preying on children continues to spread on the Internet, especially on YouTube. QAnon is an outgrowth of those misinformation campaigns.

Criezis said when the insurrectionists attacked the Capitol, many QAnon members thought this was “The Storm,” the moment they would take back “their government.” Babbitt screamed out the phrase before she was shot that day.

“There was a lot of online discussions that this was the moment of ‘the Storm,’” said Criezis, who has studied the growth of QAnon in online spaces such as 4chan, an unregulated internet message board. The conspiracy was spread by a figure called “Q,” who claims to be a high-level government official. He leaked messages on 4chan.

However, since the fallout of the Capitol attack, technology companies have cracked down on online chat planning violence. QAnon members and groups have been kicked off Facebook and Twitter. Criezis says QAnon members have now migrated to Telegram, a new social media site that is popular with white supremacists.

Criezis said QAnon has also penetrated the Republican Party. There are at least two Republican representatives, Lauren Boebert (R-Colo.) and Marjorie Taylor Greene (R-Ga.), who have ties to the group.

Greene filed paperwork to impeach President Joe Biden on the first day of his presidency. She has also repeated conspiracy theories about 9/11 and the Sandy Hook School shooting being “false flag” events designed to give the government an excuse to crack down on civil liberties. Boebert is facing accusations that she played a role in providing information to the insurrectionists.

“The GOP must contend with this conspiratorial group in their party,” said Criezis.

Colin P. Clarke, assistant teaching professor at Carnegie Mellon’s Institute for Politics and Strategy and a senior research fellow at The Soufan Center, briefed journalists on the national security implications of QAnon and other far-right groups who attacked the Capitol.

According to Clarke, other far-right groups besides QAnon participated in the attack, including the Proud Boys, a white nationalist gang, and militia groups such as the Oath Keepers and III Percenters.