Mothers Who Lost Sons to Police Violence Have Little Faith in the D.A. Prosecuting Rogue Cops 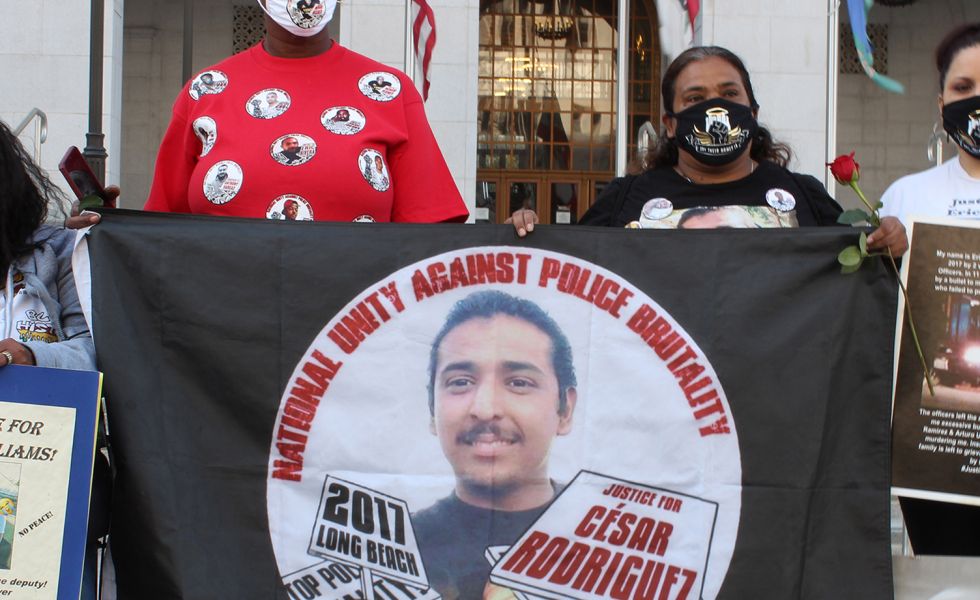 Families who have lost loved ones to police violence took center stage at a press conference Monday outside Los Angeles City Hall and echoed a sentiment that this club of heartbroken mothers continues to grow.

The “Mothers of the Club”, as the women call themselves, spoke of how their pain never goes away and expressed frustration that adequate criminal laws do not exist to hold law enforcement officers accountable in the unjustified killing of unarmed civilians.

“These are cowards in uniform getting away with murder,” distraught mother Valerie Rivera said through her tears at the small group of protesters and reporters. “What they did to my baby deserves some justice. Justice, for me, would be for my son to be still alive. But we will never get justice from this corrupt system.”

Rivera’s 20-year-old son Eric was killed the night of June 6, 2017, after police in Wilmington received a call of a man with a gun. An attorney for Rivera’s family said at the time that he told the two officers to leave him alone before they opened fire on him for holding what they thought was a gun. The lawyer further claimed they shot Rivera while their patrol vehicle was still moving.

The mothers were introduced to speak into a microphone by activists with the Coalition for Community Control Over the Police that organized the conference and demanded that recently-elected L.A. County District Attorney George Gascón bring murder charges against several police killings of unarmed suspects.

“We are here to demand murder charges from the district attorney,” said Cliff Smith, an organizer with the Coalition for Community Control Over the Police. “Gascón has been in office for three months, and he has not found the paperwork forms to prosecute these police officers yet. We are not going to give George Gascón a honeymoon.”

“In the last 40 years in the state, there has been only one police officer who has been charged for killing somebody in the line of duty, and that was Johannes Mehserle who shot Oscar Grant in the back in 2009 in cold blood on the train platform on New Year’s Day, “Smith said.

A jury convicted the former Bay Area Rapid Transit officer of involuntary manslaughter in 2010, and he served less than a year in prison.

Alameda County District Attorney Nancy O’Malley announced in October that her office would reopen the Grant case when much of the country was engaged in an angry argument about the policing of minority communities.

Meanwhile, last month, Gascón asked the L.A. County Board of Supervisors to allow him to hire a special prosecutor to oversee potential charges of police misconduct at the direction of the D.A.

Additionally, Gascón pledged to review more than 600 police shootings dating back to 2012 for possible prosecution.

But the activists criticized him for his decision to not review cases before 2012.

“He said he was only going to go back to 2012. But if any one of us had committed a murder in 2011 and they found some evidence linking us to murder, wouldn’t we be hauled off to jail? “asked Kianna Sellina, also of the Coalition for Community Control Over the Police.

She believes the sole reason Gascón refuses to review cases before 2012 is because he was the Assistant Chief of the Los Angeles Police Department when a toddler died of a single gunshot to the head, fired from a police officer’s rifle during a gun battle with authorities in 2005.

Families like Lisa Simpson, the mother of an 18-year-old fatally shot over 60 times by LAPD officers in late July 2016 and have since been cleared in their use of deadly force.

Simpson lampooned Gascón’s record as a D.A. in San Francisco for his foot-dragging and remarkable ineptitude.

“Mario Woods was shot and killed by five SFPD officers on Dec. 2 2015, and guess what Gascón did about it,” Simpson asked the crowd. “Tucked his motherf**king tail,” she added after a short pause. “Sixteen years in California – they ain’t never convicted one pig. I got a problem with that.”

Since 2001, at least 919 people have been killed by law enforcement in Los Angeles County, according to homicide records from the county medical examiner-coroner. Almost all of the dead were men, nearly 80% were Black or Latino.

A family member of Dijon Kizzee said the deputies in South Central have been harassing her after frequently appearing on television and in the media.

“The sheriff’s department has been kicking down doors and rolling up in my house in South Central,” said Jaime Kizzee, cousin of Dijon Kizzee – the 29-year-old Black man who was shot 16 times and killed by Los Angeles County Sheriff’s deputies in August.

“Justice, “she continued. “Should mean investigating these officers and putting them in jail.”