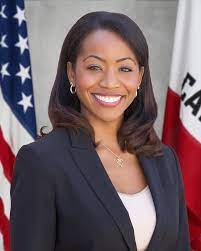 State Board of Equalization chair Malia Cohen edged Los Angeles City Controller Ron Galperin to secure the endorsement of the California Democratic Party in her race for state controller at the group’s annual convention last week.

Galperin recently came under fire by Black leaders in L.A. County for stripping suspended Councilman Mark Ridley-Thomas of his salary and benefits—a move that according to L.A. City Council President Nury Martinez was taken unilaterally.

In a letter requesting a meeting, they wrote: “We note with irony that even police officers in high profile police shootings and use of force cases receive their salaries during police department and prosecutor’s investigations, and in some instances, while they await trial. In the councilmember’s case, you discarded the presumption of innocence and due process in favor of a rush to judgement and political expediency.”

Galperin responded to a meeting request with a referral to the City Attorney who has also come under fire as of late.

Cohen, 43, is the first African American woman to serve on the board of the California State Board of Equalization, the state agency responsible for representing taxpayer interests and making county-by-county tax assessments and adjustments across the state.

“The State Controller is the elected chief fiscal officer for California. How we spend or allocate resources is a statement of our values,” Cohen states. “There is more we can do to ensure all Californians have the support they need to get ahead.”

“Money matters,” Cohen continued. “I am constantly reminded of the role public dollars play in equity and opportunity. California being the fifth largest economy in the world confirms our power as a state to deliver equitable opportunities toward fiscal viability and prosperity to all Californians from all communities. And access to public and sustainable resources to support our workers, environment, infrastructure, and schools will help us usher California into greatness throughout the next decade.”