Local Community Rallies to Save The Serving Spoon, Raises Over $150,000 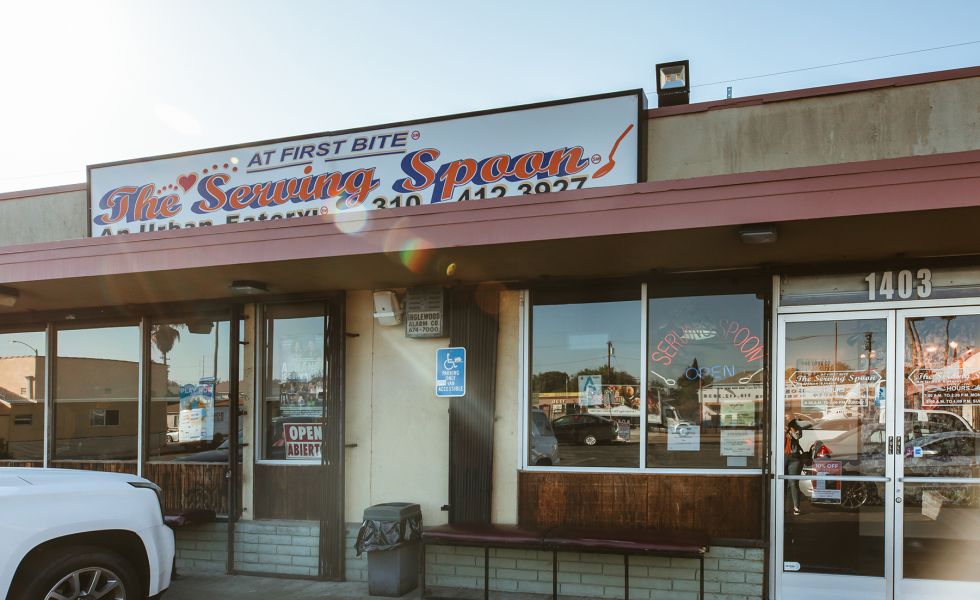 Angela and J.C Johnson were sure they were going to be forced to close the doors of The Serving Spoon, the Inglewood restaurant that’s stood in the same shopping center since 1983. The couple are in an industry with tight margins that have only gotten tighter since the pandemic began. The two have been forced to eat the costs of running the Serving Spoon refusing to raise prices and paying employees with their personal savings.

New COVID-19 restrictions in the state that closed outdoor dining again was another devastating blow that the two were worried they would be unable to bear the brunt of.

On Dec. 9 Angela started a GoFundMe fundraiser, without her husband’s knowledge, posting an emotional plea for help in saving and supporting the restaurant. It surprised loyal customers and close friends alike who had no idea the restaurant was seeing just 25% of its usual income.

“We are in need of help,” she says in the video. “This is one of the hardest things I’ve had to do, ever.”

“We know the community and the nation as a whole is hurting and everybody’s struggling financially for the most part. But you have those who are not and so my main objective when [making the page] was to reach people who had money and were trying to put money into a good situation,” Angela told L.A Focus.

And that call for help paid off, reaching local news and thousands of others across the country.

The support has been overwhelming, the couple says.

Academy Award-winning director Matthew A. Cherry tweeted out the link to his 310,000 Twitter followers urging them to “check it out and give what you can.” The Los Angeles Rams also tweeted that Rams player Andrew Whitworth and his wife would donate $50,000.

“It was a total surprise,” Andrea says of receiving the donation from Whitworth. “We’ve never met this man. They’ve never been to our restaurant…His wife actually saw us on TV and it moved her to action…He and his wife spoke to us and encouraged us and they said, this is what we’re going to do and when they said $50,000 me and my husband we just looked at each other and just started crying. Just started bawling. We just couldn’t believe it.”

The GoFundMe page alone has raised $100,000 since it launched.

“You have supported us with your finances, prayers, well wishes and words of encouragement and that has been priceless,” they wrote in an update. “What you have sown into The Serving Spoon was not in vain. It will allow us to continue serving you, as well as being a pillar in the community that you know and love.”