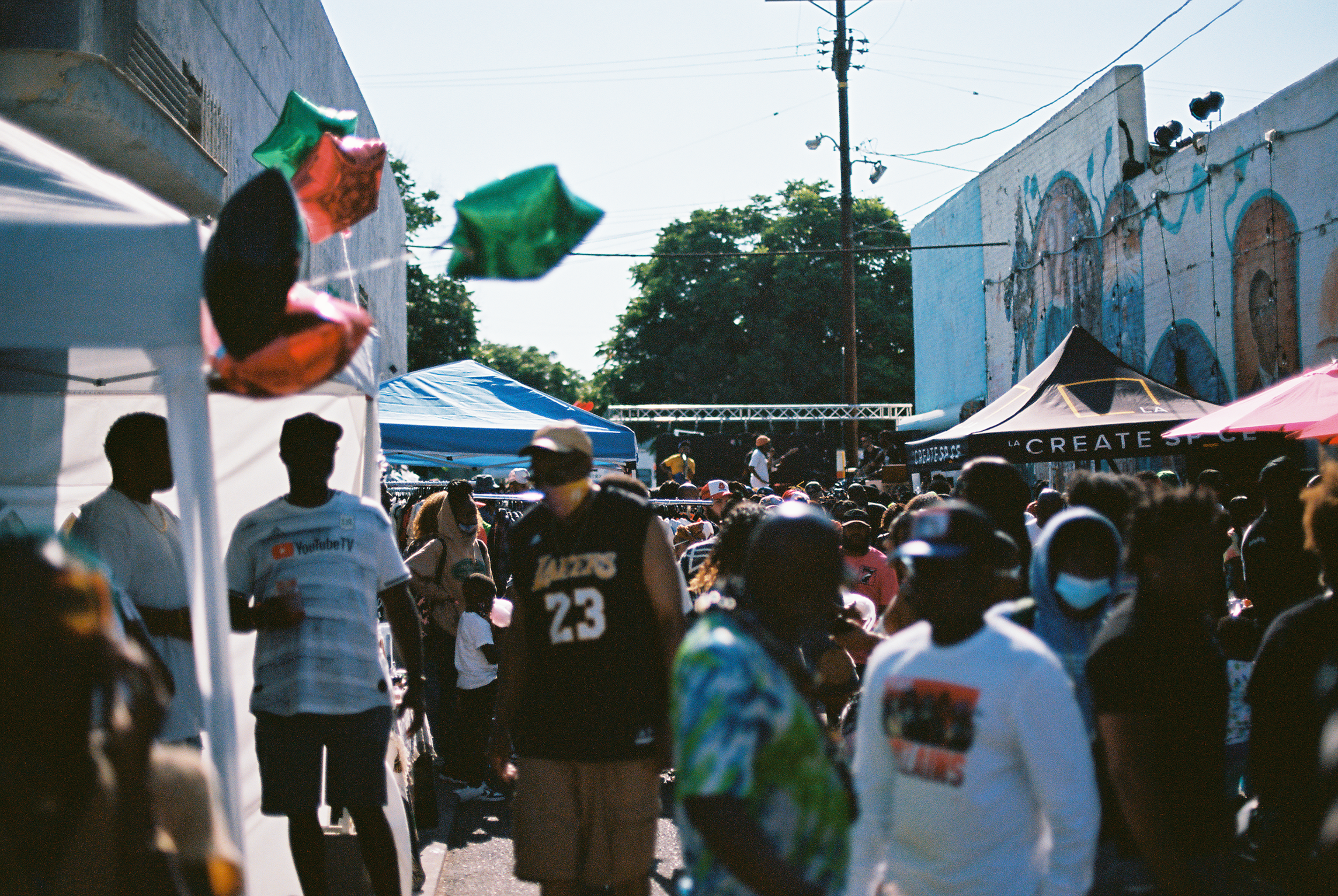 Tina Sampay
The Leimert Park Rising Festival is estimated to have doubled in size from last year’s 10,000 attendees. Black people of all shades, shapes and across a broad spectrum of careers, connected in Leimert Park this past weekend for what is quickly becoming one of the largest Juneteenth celebrations in Los Angeles.
This year, the theme of Leimert Park Rising was stronger together, as the planning committee envisioned ways to establish a stronger, cohesive, cooperative model in Leimert Park that was equitable for everyone in the village.
“We have always done the Juneteenth Heritage Festival, but the interest is shaping and shifting the energy in Leimert Park, creating a model that can be duplicated in other cultural hubs,” said Fred McNeill.
McNeill served as project manager and art director for LPR, overseeing the festival’s branding and marketing.
“There are other Black neighborhoods that can create power through collectivism and collaboration to show that culture and commerce can work together and be equitable and balanced,” McNeill continued.
Media, logistics, city and food compliance, scheduling of artists and vendors, as well as raising the capital necessary to fund a festival of this magnitude were just some of the planning committee’s tasks.
Then, there was what Kaya Dantzler of the non-profit We Love Leimert, referred to as the ‘buy in’ of various stakeholders in the Leimert Park Village and surrounding community.
“From business owners, to vendors, to community organizations like Africa Town and getting everyone to work together across ideological and political differences. That was a huge thing that we had to do,” said Dantzler.
She notes the small victories such as the gates to Leimert Park finally being open after two years and petitions circulated for access to be granted.
City Councilman Mark-Ridley Thomas is one of the officials who pushed for the gates to be reopened, especially in anticipation of LPR.
“We want policy changes and investment in the community for long-term development. We want more structural changes–not just symbolic changes. I see things are moving in a good direction, but I am waiting to see more,” Dantzler expressed.
When the tasks of planning LPR seemed overwhelming at times, Khrissy Briscoe learned to lean on her peers in the planning committee. She trusted the collective talents and expertise of the team and knew that if they stayed on the same page, they would be able to make LPR a success.
“It was long nights and meetings after meetings and always checking in with the team to make sure we were all on the same page,” observed Briscoe, who worked as the media liaison for LPR.
“When you think of Camille and Qwess, we’re talking NO sleep. They worked endless nights just making sure everything was in order,” she said of MC Ill Camille and DJ Qwess, familiar faces in Leimert Park who are artists and creatives dedicated to uplifting the artistic vibrations of Leimert Park and Black Los Angeles.
“When we were planning this, we had no idea how many people in the community were going to show up, the imprint of Leimert Park Rising was huge,” said Dorothy Pirtle who served on the vendor and compliance team.
Pirtle says it was a tall glass to fill, creating a space where 20,000 people were all satisfied, happy and felt welcomed.
“One of the activity areas we had carved out was the park for kids and families,” Pirtle detailed. “So, to see a bunch of Black children enjoying themselves with one another, in large numbers, we had not seen that in a long time.”
For many, Juneteenth is more symbolic than it is literal.
“When I think of Juneteenth, I think of the power of information. When the information did get to them in Texas that they were finally free, their whole mindset shifted,” said Paris McCoy who provided tech support through T.E.C Leimert.
“I think about what that moment was like—when your whole world changes based on information,” she continued. “When I think of Juneteenth, I think of physical and mental freedom.”
“Having a Juneteenth celebration in Leimert Park for the second year for me was a marvelous experience,” said Akil West, co-founder of Sole Folks. “For me, the multiple art installations were the star of the festival, thanks to Foster the Millions, The Lion, The Art Dpt and Sole Folks Art Lab.”
Dantzler says she is pleased with the outcome of LPR, although she notes that more resources would have allowed them the opportunity to operate the festival at a higher capacity.
“We live in such a hostile society, so knowing we can create a space where Black people can just be free, that’s motivating for me.”
Photo Credit: USC Student Dante Bailey