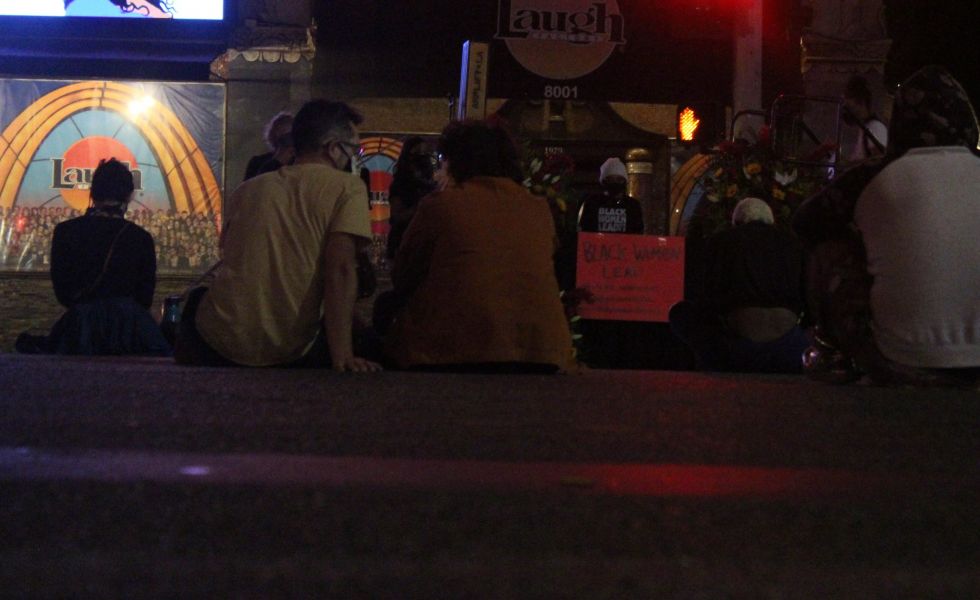 A small crowd gathered outside the Laugh Factory Monday evening for a candlelight vigil in memory of Breonna Taylor, the 26-year-old black woman who was fatally shot during a botched police raid in her apartment.

In between chants and music, Shannon Morton, the founder of Black Women Lead and the organizer of the vigil, took the megaphone, saying, ?Breonna Taylor is important. She should be here. Breonna Taylor is me. She?s my cousin. She?s my friend. She is everybody who I ever loved.?

Ka, a 25-year-old woman who would only give her first name, attended the vigil, which took place at 7: 30 pm near the intersection of Sunset Boulevard and Crescent Heights in Hollywood.

?A visual for Breonna Taylor is super important because we?re honoring her spirit. Her spirit is still with us. Black people are a people of spirit and rhythm so that?s why we?re playing music. She?s still with us. Even though she didn?t get justice, we?re still out here in her name. We?ll never stop being out here,? Ka said.

?Black women,? she said. ?We are an endangered species and they?re killing us like flies. Black women have always been at the forefront of every revolution, and it?s time for everybody to stand at the forefront for us as well. That?s why when it comes down to the polls come November, don?t just vote for yourself. You are voting for Breonna Taylor. You are voting for Sandra Bland. Vote for the Black woman Kamala Harris.?

Attendees blocked off the roadway, sitting in the middle of the road, and gave a moment of silence in Taylor?s memory for about three minutes. Many sat with lit candles beside them.

?In this quest for justice for the slain, let?s not forget the mothers. Black women and Black mothers, we bear so much of the pain. When I think about Breonna being shot in her bed, the first thing I think about is her mother. Black mothers are at the forefront of the healing process that not only America but also Black America has to deal with,? said Angelina Spicer, a comedian-actress and self-described accidental activist.

Spicer called on the attendees to turn grief into action.

?We?ve been marching, we?ve been protesting, we?ve been gathering for months now, and the fact that you all are here means so much to me because you realize without our collective voices nothing will change,? she said.

By 9: 30 p.m., it all seemed to be over. Participants reopened the street, traffic returned to normal, and the crowd dispersed.