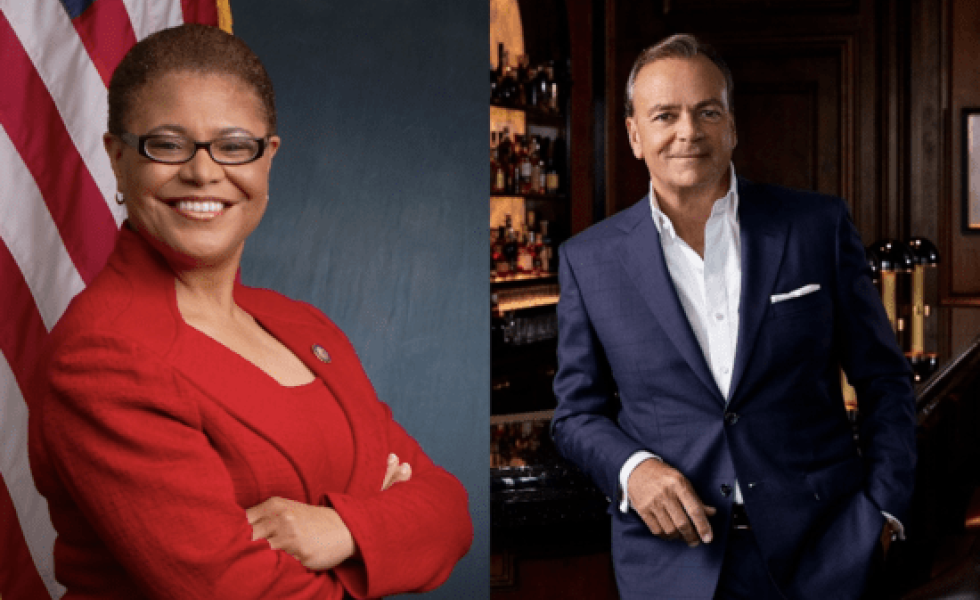 With the latest round of mail-in ballots counted in the L.A. mayoral primary, Congresswoman Karen Bass has taken the lead from billionaire developer Rick Caruso by nearly three percentage points. The latest numbers have Bass at 41.05% with 202,818 votes and Caruso—who spent a record $40 million—at 38.29% with 189,178 votes.

“We’re in a fight for the soul of our city and we are going to win the fight,” said Congresswoman Karen Bass on the eve of the primary that makes her the first Black woman to compete in a November runoff for a Los Angeles mayoral race.

“Going forward means that we have to bring together all of the people around the city and have the type of very diverse grassroots campaign that we always planned to have,” Bass added. “We started the first phase of it and now we’ll be able to become much bigger. It’s time for unity.”

Should she win, Bass would make history the first Black woman to be elected mayor of L.A., and just the second Black hold the post.

A UC Berkeley poll had ranked the six-term, battle-tested congressmember as slightly ahead of Caruso just days before the election despite a relentless avalanche of TV ads attacking her with the goal of getting to 51% of the vote and winning outright on June 7.

“You would have thought $40 million compared to $3 million, that I would have been wiped out,” Bass said, on a recent appearance on MSNBC’s “The Sunday Show With Jonathan Capehart”.

Caruso surged ahead by five points as the sun rose on June 8, but mail-in ballots have flipped the results in Bass’ favor with the final tally to be certified by July 7.

In the meantime, the Los Angeles County Democratic Party (LACDP) has announced its endorsement of Karen Bass for Mayor of Los Angeles.

“Congresswoman Karen Bass is the only real Democrat running for Mayor of Los Angeles — and the Los Angeles County Democratic Party is proud to endorse her,” said Mark Gonzalez, Chair of LACDP, representing more than 3.1 million registered Democrats. “This is a choice between a man who has spent his life profiting from the labor of working Angelenos, and a woman who dedicated her life to protecting those working families. In her service, Rep. Bass has been a lifelong Democrat and leader in the city who has spent decades fighting for the principles of the Democratic Party advocating for worker’s rights, women’s rights, civil rights, and tackling inequality. Those are Democratic values, and they’re Karen Bass’ values. We look forward to getting her elected to City Hall.”

“I’m honored to have the endorsement of Los Angeles County Democratic Party,” said Rep. Karen Bass. “Together, we can bring Los Angeles into a new era, by leading with our Democratic values: building housing for the unhoused, making sure all Angelenos feel safe, ending unacceptable levels of poverty, and making sure that the economy works for working people. We must choose to move our city forward.”