Jacqueline Avant’s Killer Sentenced to 190 Years, Joked About Publicity He Received While in Jail 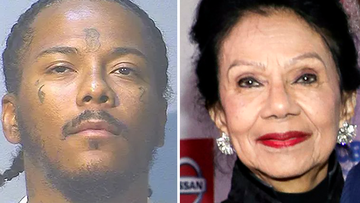 Aariel Maynor, the man convicting of murdering Jacqueline Avant, philanthropist wife of music industry godfather, Clarence Avant, was sentenced to 190 years in prison this week. Maynor, 30, pled guilty in a Los Angeles Superior Court last month to first-degree murder, attempted murder, firearm possession and residential burglary for killing Avant, 81, in the early morning hours of December 1 at the Beverly Hills estate she shared with her husband, who was not injured.

Maynor was arrested hours later while attempting to burglarize a home in Hollywood after accidentally shooting himself in the foot and dialing 9-1-1 for help. Beverly Hill police maintain that the convicted felon—who was on parole —had researched the Avants and had planned to rob them of $50,000.

He was also reported to have joked about the murder and the publicity he was getting while in jail.

“Today marks the end of a tragic case that rocked our community,” announced Los Angeles County District Attorney George Gascón in a statement. “Because of a completely senseless act, Los Angeles lost Jacqueline Avant, a community leader and philanthropist. Her murder sent shockwaves through our community, prompting fear, concern and a tremendous sense of loss. Given the sentence today, Mr. Maynor will be ineligible for early parole, and will spend the rest of his life in prison.”

“This sentence and conclusion of this case also prevents a painful and lengthy process of trial for the Avant family, a process that can be traumatizing. There was never any doubt that we were going to pursue this case rigorously, this case shocks us all. Our office has, and will continue to, seek to hold accountable those who cause grievous harm in our communities.”