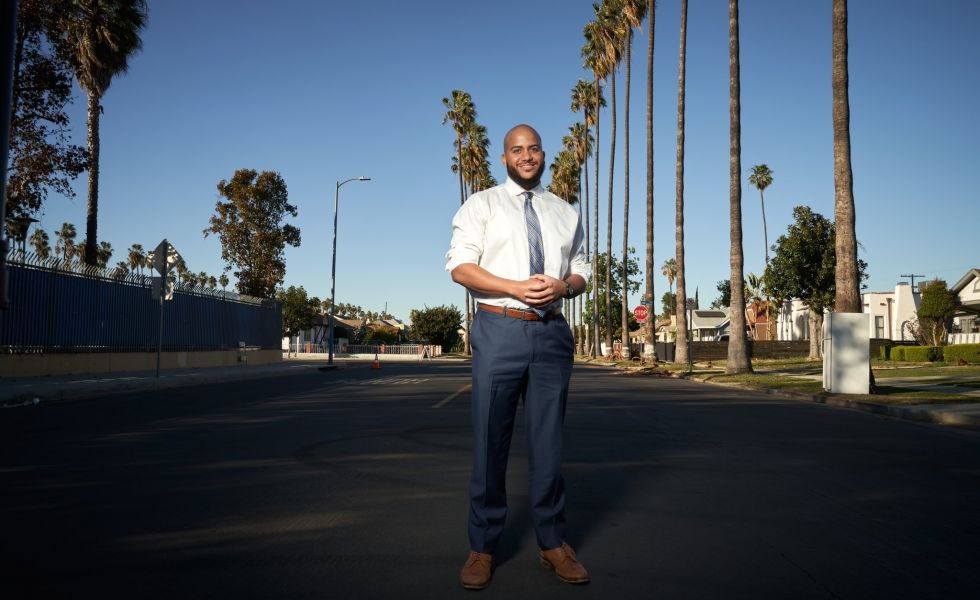 With a vacant 54th Assembly District Seat up for grabs, candidate Isaac Bryan has racked up donations and endorsements that have him dominating in a field of six opponents, including Heather Hutt, a former senior advisor to now Vice President Kamala Harris, businesswoman Dallas Fowler and civil attorney Cheryl Turner.

Many eyes have been on Bryan since his campaign gained swift momentum, raising over $55,000 before the campaign deadline last year. None of the other candidates had even passed the minimum threshold to file an online year-end report. To date, his campaign has gathered over $350,000.

Recently, more heat has been added to the race with the announcement of Bryan’s high-profile endorsements from Senator Sydney Kamlager-Dove, Congresswoman Karen Bass, and Supervisor Holly Mitchell – who were criticized by Huff and Turner for failing to endorse any of the three black women seeking the Assembly office.

“Their endorsement could discourage women from seeking office especially when women are making statements about supporting Black women, but are not supporting a qualified Black woman,” Hutt said to reporters.

“I’m feeling humbled by the amount of support that this campaign has received,” admits Bryan, an educator and director of public policy at the UCLA Ralph J. Bunche Center for African American Studies. “The community put me on this ballot and the work isn’t mine alone to claim. This campaign, like Measure J and so many policy changes before, is a labor of us. I feel like we have a real chance to do something special.”

If the election goes in his favor, Bryan’s first legislative action will be to ensure an equitable COVID-19 response. “I will seize opportunities to use the state’s multibillion dollar surplus to allocate additional funds for COVID relief to the most impacted communities – particularly those, like black, Indigenous and people of color (BIPOC)-owned small businesses, that have been overlooked by Federal relief programs,” he said.

Councilman Mark Ridley-Thomas says Bryan “has proven to be a force for change – as an organizer, academic, coalition builder, and powerful voice for changing our system of justice – he represents the next generation of leadership for Los Angeles and California.”

Hutt, whose most recent work was serving alongside then-Sen. Kamala Harris’ as state director and senior advisor, is further stirring the campaign pot. “You need the Black women’s perspective for balance,” she argues. “How can Black women elect the president of the United States, but we don’t have representation here?”

If elected, Hutt will prioritize addressing homelessness and affordable housing, the education gap, the disparities in access to health care, and climate change. As a Los Angeles native, she insists her connections and previous experience make her well-qualified to best represent the 54th District’s constituents.

“This district has been my home my entire life,” stressed Hutt, a single mother of three sons. “I am committed to making sure the people have an effective, unrelenting advocate that delivers on our community’s wide variety of needs during this challenging time. This includes COVID-19 relief resources, rebuilding our small business community, helping to lift-up working families, and strengthening the safety net for our most vulnerable.”

Civil Attorney and Trial Lawyer, Cheryl Turner, is another candidate who promises to help the 54th District rebound from the ills of the pandemic. She’s banking on her record of legal counsel service in Los Angeles and the State of California to edge her into the open assembly seat.

“My legal background will enable me to propose, evaluate and advocate for laws that will benefit this district,” states Turner. “My history of public service to this community assures you that I will be on the lookout for [the residents] best interests and not be swayed by special interest groups whose interest conflict with our community’s needs.”

Turner has only publicized her endorsement from the Los Angeles African American Women’s Political Action Committee on her website. The Sustainability Coalition, the Apartment Association of Greater Los Angeles, and the California for Fair Housing are other organizations backing her. “I will work tirelessly to improve our district and I will never give up until we accomplish what is best for our community,” Turner says.

Similar to Huff, she had words for Kamlager-Dove, Mitchell and Bass for their support of Bryan. “I am disappointed that our three women elected officials chose to support the candidacy of a man over the three women candidates in the race for the 54th Assembly District seat,” Turner told reporters. “Politics will be politics and there is something to be said for showing loyalty to someone that you have worked with in the past and that you can easily influence.”

“We need a generation of leadership that centers people first,” says Bryan. “I’ve built coalitions and brought people together who usually don’t see eye to eye – but who recognize our shared values.”