In Defense of Voting Rights in City Council District 10 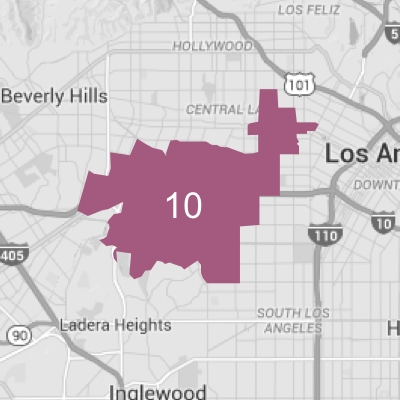 Next week the Superior Court will hear arguments as to whether it should grant a preliminary injunction barring Herb Wesson from acting in any capacity as a Councilmember for District 10. The lawsuit was filed by the Southern Christian Leadership Conference—Southern California (SCLC- SC) and the League of Registered Voters of District 10 after the City Council appointed Mr. Wesson — an indisputably “termed out” Councilmember — as a “temporary” replacement for Councilmember Mark Ridley-Thomas in violation of the City Charter. As members of a network of pastors of South L.A. churches with well over 50,000 congregants, we see this legal challenge as a continuation of the defense of voting rights and believe that the preliminary injunction should unquestionably be granted.

District 10 deserves better than being represented by a man who is not legally eligible to serve. His actions to date have caused the District significant and irreversible harm.  If the preliminary injunction is granted, as we hope it will be, the City Council and City Attorney should abandon their efforts to justify Mr. Wesson’s appointment. A trial will not take place until October.  Rather, the Council should work with the constituents of District 10 to find a suitable replacement.

In our March 25, 2022 letter signed by two dozen South Los Angeles pastors to California Attorney General Rob Bonta in support of the quo warranto application pertaining to this matter, we said “The City Council must adhere to the rule of law. The City Council must consistently abide by the City Charter. It cannot pick and choose which provisions to honor. To do otherwise is to further erode its reputation as well as to violate the voting rights of CD10 constituents….”

Failure to abide by the term limit provisions of the Charter also violate the voting rights of ALL City voters.  Charter provisions are voter enacted. A violation of a provision constitutes nullification of the voter majority that supported its adoption. This work follows a long tradition of working to perfect our democracy.  When we defend our voting rights, we protect the voting rights of everyone.

The resort to the court is consistent with the historical practice of SCLC and African American communities to seek judicial relief when confronted by local elected officials who fail to adhere to the rule of law in violation of their statutory obligations and administrative procedures.

At a moment in our nation’s history when the rule of law and voting rights are under threat and fundamental democratic norms and values are being challenged, it is critical that District 10 be represented by a council member who is lawfully eligible to temporarily fill (presumptively innocent) Councilmember Mark Ridley-Thomas’ seat.

In our May 5 letter to Wesson memorializing a discussion about the agenda for a proposed meeting with our group, we pointed out that “one of your first official acts was to permit the ‘Caretaker’ (Mark Ridley-Thomas’ chief of staff) to be terminated without cause, and without meeting with her. This action came without an update on budget, land use or project priorities, or the status of representational or constituent activity.”

This destabilizing personnel action prompted a rapid exodus of District 10 staff and compounded the harm done to the district constituents.  By dismantling the team that had remained largely in place prior to the Wesson appointment, constituents and stakeholders were deprived of a highly credentialed and dedicated staff of public servants that managed to remain intact for four tumultuous months following the Ridley-Thomas suspension.

Our May 27 letter memorializes “temporary” Councilmember Wesson’s inability to meet with SLACPA on advice of the City Attorney. Despite our suggestion that a representative of the City Attorney’s office be present during the proposed meeting to advise him in real time about matters that could arise and may impact pending litigation, Councilmember Wesson has refused to meet with us. This inability or unwillingness to meet with constituent stakeholder groups such as ours and represents tens of thousands, is another example of the harm being done to CD10 constituents.

In the absence of transparency, the effectiveness of a Council-appointed representative is compromised by the perception of a “back room” deal of dubious legality and legitimacy.  The process leading to Wesson’s “temporary” appointment degraded support for representative democracy and undermined public trust. In our June 29, 2022 letter to Martinez, SLACPA wrote, “We wish to avoid another secretive, selective appointment process that fails to place legitimacy, transparency and accountability at the forefront of the effort. We implore the City Council to engage CD10 constituents and stakeholders in a more inclusive, open, transparent process of selecting a Tenth District representative accountable to Tenth District voters.”.

In short, Herb Wesson should be barred from unlawfully serving as CD10’s temporary representative in violation of the Charter’s term limits provision and a more transparent and accountable selection process must be used if a new appointee is selected.