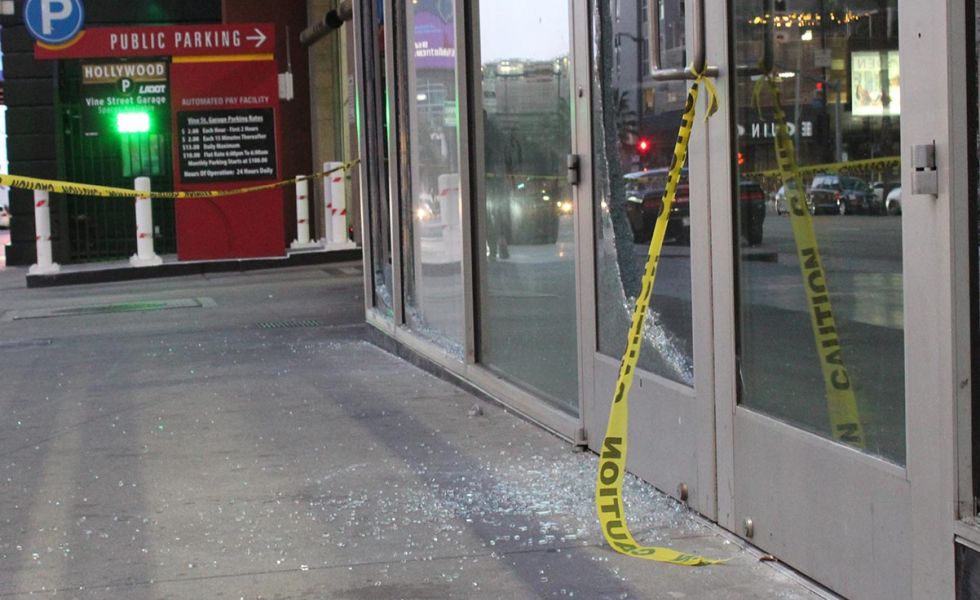 Evidence of vandalism after violent confrontations between Los Angeles police and protesters in Hollywood on the first anniversary of the death of Breonna Taylor, a Black woman fatally shot by Louisville police during a botched raid at her apartment.

Now, more than a week after the unrest, many businesses are still barricaded.

“We have a damage of roughly ten grand,” said the General Manager of BIBIBOP Asian Grill, Diana Arias, who also told L.A. Focus that of all the businesses on the strip, her restaurant possibly suffered some of the most severe damage from the carnage.

The rally began peacefully, with as many as 200 people gathered in Hollywood marching through streets blocking traffic at times. But what started as a peaceful protest soon after morphed into a tense standoff with police in riot gear at Vine Street and Lexington Avenue’s intersection.

Law enforcement responded to calls that several protesters dressed in all black clothing and equipped with various weapons had smashed windows and graffitied buildings.

The acronym “ACAB” (All Cops Are [Explicit] covered the walls in graffiti messages.

Video footage from the scene shows an unidentified man who tried unsuccessfully to keep a small mob of protesters from smashing the business’s windows but got pushed to the ground.

“There’s no need to break glass,” the man said.

Ignoring the man’s pleas to stop, a tall, slim protester armed with pepper spray spewed profanity to express his anger before other protesters grabbed the man and hauled him away.

“Breaking glass is not violence,” yelled the protester at the man. “What the [explicit] does glass matter to you? Police are killing people, and you give an [explicit] about glass.”

One protester was also treated for “injuries sustained during a use of force” by responding cops. The demonstrator was booked on charges of assault with a deadly weapon on a police officer, department officials said.

Meanwhile, the next day after the protest, LAPD Chief Michel Moore tweeted a link to a YouTube video of items being thrown at the officers, writing, “NO justification/excuse for this violence.”

Responding to that tweet, Capt. Steve Lurie, commander of the Hollywood Division, wrote that Hollywood officers were out that Saturday night “to ensure this group could express themselves under the umbrella of” the 1st Amendment, but the protesters “came to destroy Angelenos’ businesses and attack police officers.”

Nine businesses were vandalized during the protest, police said.

“Our building sustained several broken windows and doors, but then most of the damage was to our retailers who are responsible for their own repairs, which were hit really hard, said a property manager of a building on Sunset Boulevard and Vine Street and who requested anonymity in line with speaking publicly about the company’s matters without prior approval.

Some of the sources for this story said they would pursue criminal charges against people arrested during the protests.

“Everybody’s pressing charges because of the huge damage done to our stores, said Aria, the General Manager of BIBIBOP Asian Grill. “We’re not even sure if the people who were arrested were actually protesters because whatever point they were trying to make was quite apparent given all the damage they did to our businesses.”

Aria said she has supported in the past those who are rightfully outraged by the senseless loss of life in Louisville and elsewhere at the hands of police but wishes the culprits responsible for the damage to properties would realize the price business owners pay for vandalism goes far beyond money.

“They are causing more damage and hurt to others and saying they’re doing it to remember Breonna Taylor,” she said. “I wish they would’ve considered how bad this would look in [Breonna Taylor’s] name.”

No officers, meanwhile, who were at the residence in search of drugs have been charged in Taylor’s death, but a grand jury indicted one cop for shooting into neighboring apartments. No drugs were found during the raid.