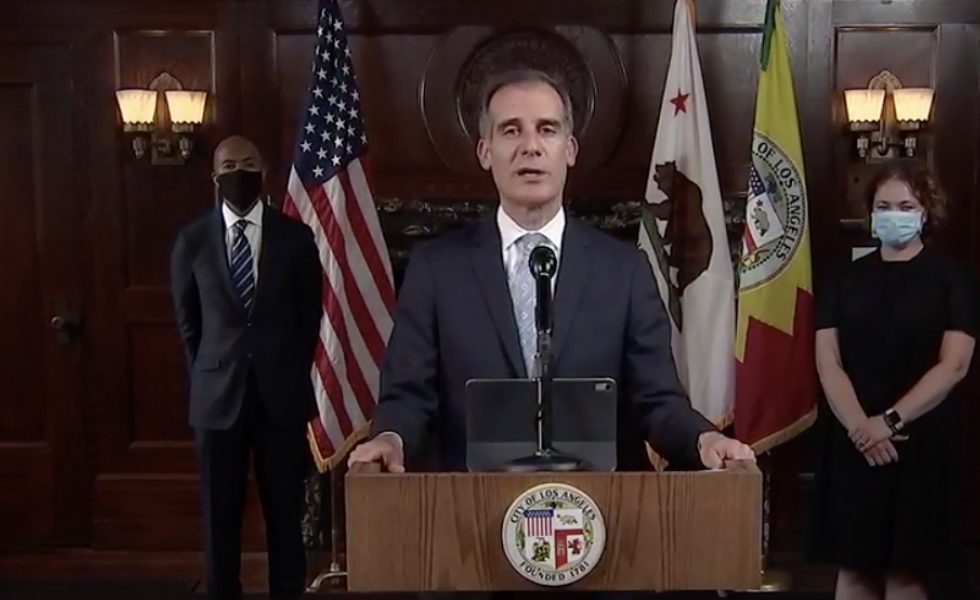 As part of his annual “State of the City” address, Mayor Eric Garcetti announced the launch of what may be the largest guaranteed basic income pilot in the nation, budgeting $24 million to provide 2,000 Los Angeles households with $1,000 monthly for one year.

Said Garcetti, “We’re betting that one small but steady investment for Angeleno households will pay large dividends for health and stability across our city and light a fire across our nation.”

The $24 million does not include the $6 million Councilmember Curren Price earmarked for a guaranteed income pilot focused on single parents in his 9th council district, which includes South L.A.

“Thanks to the leadership of Councilmember Curren Price, Councilmember Marqueece Harris-Dawson, and other councilmembers, these funds will grow to more than $30 million in direct help to begin to tear away at poverty in our city and show this nation a way to fulfill Dr. King’s call for a basic income once and for all,” Garcetti added.

Candidates for the one-year program would be selected from the city’s 15 districts, based on each area’s share of those living below federal poverty guidelines which is $12,780 for a single household and $31,040 for a family of five. While the qualifications have not been fully determined, they will likely include households with at least one minor, those who have suffered some hardship relating to the Covid-19 pandemic.

The city of Compton recently launched a similar program, providing 800 low income residents with $300 to $600 month using prepaid debit cards or through Venmo for two years.

“This is a great opportunity to address inequalities for Black and brown people and also additional opportunities for upward mobility,” said Mayor Aja Brown.

Brown is part of a coalition called the Mayors for Guaranteed Income, sponsored by Twitter CEO Jack Dorsey and led by Michael Tubbs, the former Stockton mayor who championed the first such program in California when in 2019 he provided 125 residents living in areas with a median income at or below $46,033 with $500 per month for 24 months with no restrictions.

Researchers found that the program did not discourage people from working as some feared it might. Instead, preliminary statistics showed that the two year program worked to increase employment prospects, create financial stability and reduce stress and depression among its participants.

As a result, fifty mayors have signed on and a number of California cities—including Oakland, San Francisco and now Los Angeles have followed suit.

“For families who can’t think past the next bill, the next shift or the next health problem that they have, we can give them the space to not only dream of a better life, but to actualize it,” Garcetti said in an interview with LAist.