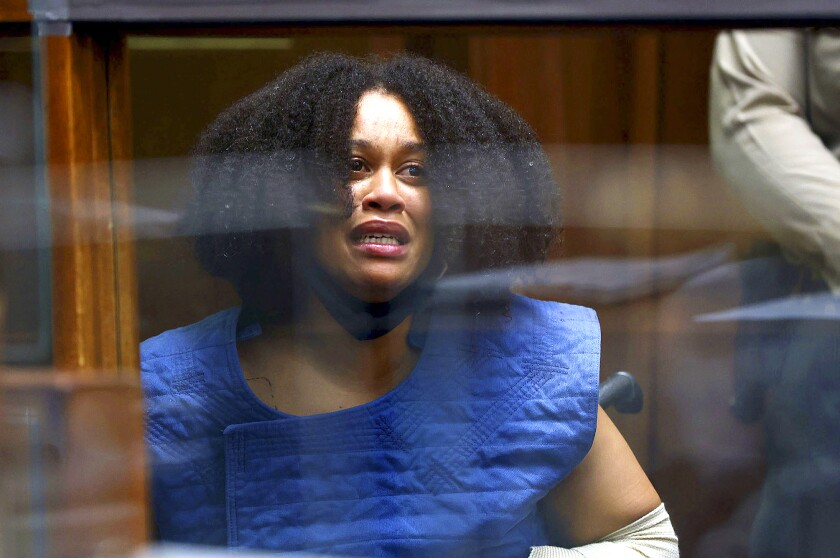 Nicole Linton, the 37-year old traveling nurse, charged with six counts of murder and five counts of gross vehicular manslaughter in the deaths of four adults—including an eight and a half month pregnant woman—and an 11-month old toddler, faces up to 90 years in prison, if convicted.

None of that however is comforting to 23-year old Dala Guy, whose brother, Reynold Lester was behind the wheel of the car carrying 23-year old Asherey Ryan and her 11-month old son, Alonzo Quintero, that burst into flames before splitting apart ejecting both Lester’s pregnant girlfriend and her young son.

“A young family was destroyed in the blink of an eye,” Gascón said in announcing the charges against Linton, who is being held at the Century Detention Center. “This incredible tragedy has sent shockwaves throughout Los Angeles and the loss of so many precious lives will have a lasting impact on those that are closest to them.

“Words cannot express the pain I am feeling right now having lost my world,” said Guy.

“At the ages of 3 and 4, Reynold and I were placed in foster care and left to handle this world alone. Growing up Reynold was the most intelligent person I knew, always getting good grades, always tucked away under his covers reading all of the latest Percy Jackson books, and just always being his authentic self. He was always my protector when I needed him the most and I couldn’t have thanked him more for that.”

Lester, who has had a tough time as a foster child, wasn’t as fortunate as his sister to have been adopted. Just before the deadly accident he had been staying with the family of his girlfriend, Asherey.

“He had just contacted me to express how happy he was about becoming a dad,” Guy reported of their conversation a couple of days before the fatal accident.  “He was so excited about the family he was building and the child he had on the way.”

Initially, Lester had been included in the gofundme set up by Asherey Ryan’s family which has now raised upwards of $165,000, with its donors including actress Issa Rae. But Lester’s name has since been removed from the page, leaving Guy once again to fend for herself and her brother.  Thus far, she has raised $9757, but more is needed to cover burial costs.

If you want to help, visit: https://www.gofundme.com/f/our-beloved-reynold-lester.

Linton, who has been denied bail ahead of her next court appearance on August 15, sped through a red light at upwards of 80-90 miles per hour slamming into multiple vehicles and sending eight people to the hospital. Two women found dead in a second vehicle that was engulfed in the flames have yet to be formally identified.

The toxicology report performed on the ICU nurse came up negative for drugs or for alcohol, but her attorney, Halim Dhanidina reported that Linton suffered from “profound mental health issues” that may be linked to the case.

Said District Attorney George Gascón, “This is a case that will always be remembered for the senseless loss of so many innocent lives as they simply went about their daily routines.”