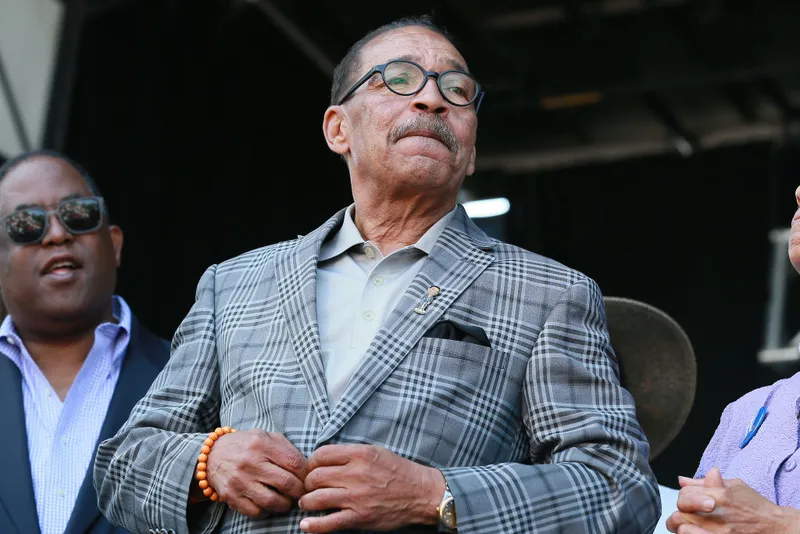 It is no longer a question of whether or not residents and stakeholders will have a voting representative on the City Council to fill suspended Councilmember Mark Ridley-Thomas’ seat, it is a matter of who. Today, City Council President Nury Martinez made it clear who her choice was with an official recommendation of former 10th District Councilmember Herb Wesson to the post.

While for many the move almost seals the deal, the motion will have to be approved by an 8-vote majority of the City Council in a vote that is slated to take place next week. If confirmed he would hold the position through December 31, unless the charges are dropped against Ridley-Thomas or he is acquitted.

“Mr. Wesson cares deeply about the communities he represents and knows the district better than anyone,” Martinez said. “The constituents of Council District 10 need a voting member who understands their community to represent them within Council Chambers.”

“While we celebrate the fact that the City Council selected someone that is familiar with Council District 10, we’re very concerned with the process done to make the choice by Council President Martinez who was blatantly deprived the voices of Council District 10 by not hosting any community forums with the residents or by cherry picking the discussions with residents she did have,” observed Rev. K.W. Tulloss, president of the Baptist Minister’s Conference.

Attorney Michael J. Proctor, who is representing Ridley-Thomas, characterized the move as premature and anti-democratic. “Since day one, Mark-Ridley Thomas has pledged his commitment to continue serving the constituents of District 10. The council president’s process has lacked, transparency, inclusivity, or input from the voters. Those voters are thus being deprived of their first order constitutional rights of representation. Mark Ridley-Thomas’s concern is for those constituents — and an appointed representative, beholden to Nury Martinez, does not resolve this denial of representation.”

Requests by a coalition of CD10 block club leaders and stakeholder for a meeting went unanswered and had announced that they might take legal action, though Martinez maintained that she had reached out to the community to get their input.

“I believe that the Councilwoman has hid behind COVID for too long in not allowing the residents to have a voice in the process via an audience with the City Council as was the case before the pandemic,” Tulloss added. “If she’s going to be president of the City Council, we expect her to hear directly from the residents of all council districts including District 10.”

For those like Rev. Norman Johnson, who was among a coalition of South Los Angeles pastors working to get Ridley-Thomas reinstated, the move is a politically motivated one.

“Nury is seeking to create another vote for herself,” said Johnson, referring to the belief on the part of some that Martinez is amassing council support in a bid to become interim mayor upon Mayor Eric Garcetti’s confirmation as U.S. Ambassador to India.

“Nury Martinez was able to accomplish what the voters of the 2nd supervisorial district did not accomplish,” Johnson continued, “and that is Herb Wesson sitting in a seat that Mark Ridley-Thomas was in.”

Johnson also questioned the legality of the move and the term for which Wesson would serve.

“It is really not clear from the City Charter that this is a correct interpretation of the charter and it will be discussed among the clergy and we certainly would like much more clarification on whether or not it is permitted in the city charter.”

To be sure, there are those who are happy with the idea of Wesson returning to the City Council representing the city’s Tenth District.

“Herb has and will continue to be a champion for the district he represents and the city that he loves,” said Los Angeles County Democratic Party Chair Mark J. Gonzalez.

“With so many issues facing Los Angeles right now, thanks to President Martinez, the residents of CD10 will have the representation and a voice in City Hall they deserve until Councilmember Ridley-Thomas is cleared of his charges”.

Wesson, who has been mum on the issue, once served as president of the City Council during his tenure as CD10’s councilman from 2006 through 2020, when he termed out. Though initially favored in a subsequent run for the County Supervisor, he was defeated by Holly Mitchell.