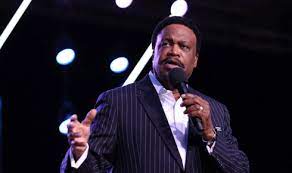 On Sunday, February 6, Bishop Kenneth Ulmer officially introduced assistant pastor John-Paul Foster, dubbed “J.P”, to congregants at Faithful Central Baptist Church as the co-pastor, adding that a year from now he would be presented to the church as its new senior pastor.

In the meantime, they will be sharing duties. And while plans for the transition have been in the works for at least a year, Ulmer is honest enough to say that he is not all that sure of what co-pastoring will look like.

“I think the main thing is the church understanding that I can’t do this by myself and I can’t do this from now on. It was really setting the stage for the season of transition without the details. I don’t have a five point plan and all that. This is just a time of sharing the responsibility.”

What the 74-year old pastor and author is clear on is that as of the first Sunday in February of 2023—which will mark the end of his 40th year at Faithful Central Bible Church— he will no longer be the pastor.

As to his future involvement?

“I’m stepping down. I’m not stepping away, said Ulmer. “I’ll still be involved with the church in some kind of counsel. I’ll be the pastor to the pastor.”

Ironically, Foster wasn’t initially hired to be Ulmer’s successor. Instead, he was brought on seven years ago as the church’s young adult pastor and over the last seven years, Ulmer has witnessed his growth.

“I’ve watched him even when he didn’t know I was watching him, but he was never brought in to be my successor. When I hired JP, I didn’t really know him that well.”

Born and raised in England, Foster received his Bachelor of Arts in Biblical and Theological Studies at Biola University. After completing his bachelor’s degree, he received his Master’s degree at Talbot Theological Seminary. He has also studied Church Unity and Reconciliation at Oxford University in England, Organization Leadership at the King’s University, Prophetic Literature at Moody Bible Institute and has served as an adjunct professor at Biola University.

“Both of us were ready. I saw 40 years coming a long time ago,” Ulmer reflected. “I tried to make it clear, J.P. is God’s choice, he has my spirit. He doesn’t have my anointing just as I don’t have his anointing.

The challenge, says Ulmer, is not having a good role model for transition.

“What’s it going to look like, I don’t know. There’s no manual for transition. I don’t know of churches like ours who have done smooth, successful transitions.”

In the meantime, Ulmer says he will be praying.