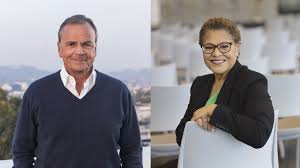 “We’re in a fight for the soul of our city and we are going to win the fight,” said Congresswoman Karen Bass on the eve of the primary that makes her the first Black woman to compete in a November runoff for a Los Angeles mayoral race.

“Going forward means that we have to bring together all of the people around the city and have the type of very diverse grassroots campaign that we always planned to have,” Bass added. “We started the first phase of it and now we’ll be able to become much bigger. It’s time for unity.”

Ballots are still being counted with the final tally certified by July 7, but the stage is set for a runoff between the veteran lawmaker and billionaire developer.

That the two will be facing off in November comes as little surprise given her political capital, track record and popularity, and his rising name ID and billions. Should she win, Bass would make history the first Black woman to be elected mayor of L.A., and just the second Black hold the post.

First, however, she will have to defeat a billionaire who spent over a record $40-plus million (12 times what she spent) to rise from 6% in the polls—when he entered the race—to 42.14% of the primary vote, placing him a little more than five percentage points ahead of the veteran lawmaker’s 36.95% heading into the runoff.

A UC Berkeley poll had ranked the six-term, battle-tested congressmember as slightly ahead of Caruso just days before the election despite a relentless avalanche of TV ads attacking her with the goal of getting to 51% of the vote and winning outright on June 7.

“I would have preferred to come in first place, but given the millions Caruso spent attacking Karen Bass, it’s surprising he didn’t get more votes,” said political analyst Kerman Maddox, who served as Bass’ campaign finance manager.  “He spent over $40 million and the runoff results are relatively close. A $40 million television barrage would have destroyed most campaigns, but Karen Bass remains in striking distance.”

Some political analysts suggest that more time for Bass could spell trouble for Caruso and could swing the election in her favor. Others maintain that a backlash against career lawmakers in favor of change is what drove a growing number of Latino and Black men to support Caruso.

“I’m not a career politician,” Caruso told a KNBC reporter. “This is new to me and that’s the great thing about it. I’m not saddled with these old rules, I’m not saddled with excuses. I’m used to getting things done because I have to in business…and I’m going to bring that leadership to City Hall and we’re going to fix the problems.”

Both will have distinct advantages going into the November election, but Maddox remains confident.

Explains Maddox, “The November General election—with all of the important initiatives —will generate a considerably larger turnout which will include a younger, larger and more diverse electorate that favors legitimate Democratic candidates like Karen Bass.”

In the meantime, Bass is looking ahead, stating on primary election eve, “We’re going to bring together all of the neighborhoods, all of the people, all of the grassroots organizations, all of the leaders and we are going to build the Los Angeles of the future.”