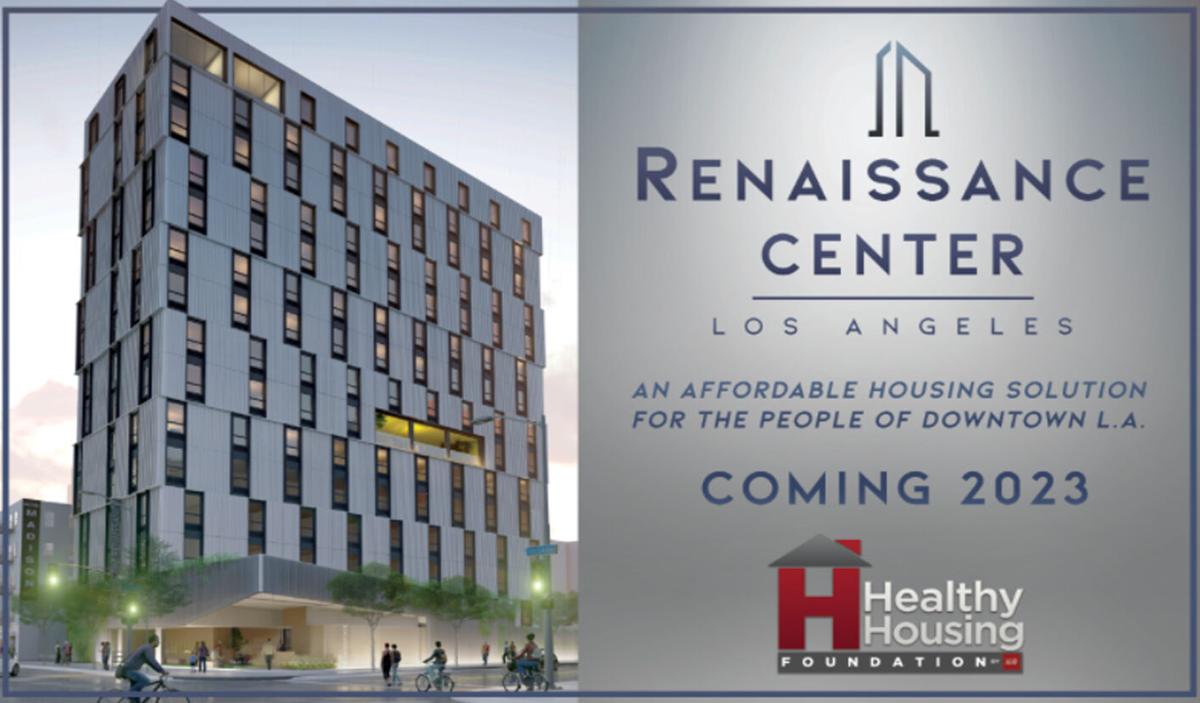 AHF and its Healthy Housing Foundation hosted a groundbreaking and dedication ceremony for its newest facility on Skid Row in Downtown Los Angeles last week in celebration of their ongoing commitment to eradicate homelessness.

The new building, the “Renaissance Center” will be comprised of a 216-unit, 15-story modular high-rise when completed, which will serve as housing for extremely-low-income and formerly homeless individuals and sits adjacent from its Madison Hotel; a historic 220 single-room- occupancy hotel which AHF previously purchased and repurposed as affordable housing in 2018.

“Today’s groundbreaking ceremony for the new 216 unit “Renaissance Center”, represents another milestone in the history of AHF,” said Cynthia Davis, Domestic Vice Chair, AHF Board of Directors. “The fact that we are holding this ceremony, while also commemorating Martin Luther King Day, is a testament to AHF’s vision to “Fight For What Is Right”, while working tirelessly to end homelessness in Los Angeles County. Dr. Martin Luther King Jr. was an advocate fighting for the civil and human rights of the disenfranchised, the poor and homeless; AHF is continuing his legacy of advocacy with the construction of the new Renaissance Center.”

AHF President Michael Weinstein was joined by a host of elected officials and community groups.

“Every human being deserves access to quality homes,” he continued. “That’s why we’re here to come together to pick each other up…to back each other up. As we celebrate Martin Luther King Jr. weekend, it’s not lost on us that the largest number of individuals living on Skid Row are African Americans and Latinos. That’s why we need to step up. We’re going to keep on moving until we have housing for every human being in the great city of L.A.”

“Dr. King shared we must do more to get people to understand the size of the problem,” observed Brotherhood Crusade CEO Charisse Bremond. “This new housing gives me hope that AHF is leading with empathy, compassion and purpose.”

Housing for people of color, more specifically Black Americans, has been an ongoing issue for several decades. To date, more than half of Black Americans don’t own homes. This shows that discriminatory housing laws and practices continue to be a huge challenge.

Urban League President Michael Lawson said that his group stood shoulder to shoulder with the AIDS Healthcare Foundation and Healthy Housing, “because they are doing the work that needs to be done.

“Is this going to solve all the problems? No,” Lawson stated, “but it is one step toward giving us the economic equality that we need.”

AHF launched Healthy Housing Foundation in 2017 to address the rampant affordable housing crisis sweeping the nation by providing fast, easy, and compassionate access to affordable housing with a focus on addressing the needs of low-income individuals, struggling families, youth, and those living with chronic illness.

Sharon Logan knows first-hand the benefits of programs like the Heathy Housing Foundation.

“Thanks to projects like these that helped me and my family, I’m now in a good place,” said Logan. “I’m a grandmother, my kids went to college and they have their own homes now. Without this steppingstone, I wouldn’t have been able to do that.”