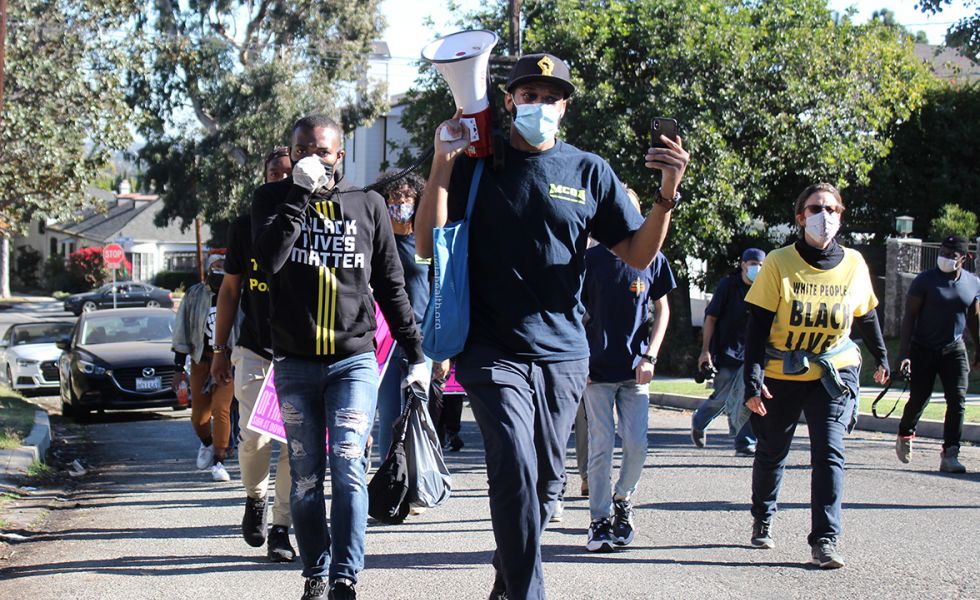 A group of Crenshaw Subway Coalition protesters and activists affiliated with various organizations marched through a predominantly Jewish residential neighborhood on Sunday demanding that Asher Abehsera of the real estate firm LivWrk, should pull out of the deal to purchase the Crenshaw Plaza in Los Angeles.

But the group’s appearance was not well-received by some of the neighbors gathered there in anticipation of their visit.

The home association had warned the residents about the planned demonstration and advised them not to engage with the protesters, according to people with knowledge of the situation who requested anonymity.

About eight to 12 neighbors stood along the sidewalk, holding signs condemning the demonstration.

“You’re not allowed to come into a residential neighborhood and disturb the peace,” yelled a rabbi draped in the Israeli flag. “We know who you are. You’re ingrates. We bled for you during the civil rights movement and this is the gratitude we get. You don’t deserve our help.”

The rabbi who later identified as Parry Moshe noted that Abehsera is Jewish and that an attack on him was an attack on the entire Jewish community.

“You attack one Jew, it’s a desecration of God’s name because we’re his chosen people,” he said.

Damien Goodman, the founder of the Crenshaw Subway Coalition, who organized the march, opposes the sale of the mall to Abehsera because he says it will create gentrified induced-displacement of the Black and low-income residents.

Goodman chose the Beverwil Drive near Circle Park to hold the demonstration because Abehsera owns a private residence in the area.

“We’re making his neighbors aware of his business practices and hopeful that the good conscious people in the Jewish community could potentially influence the decision that will stop him from purchasing the mall. We cannot consider this just business as usual. This is a traditional tactic used by organizers in the fight for housing justice,” said Goodman as he walked the neighborhood, placing flyers on residents’ doorknobs.

The developer, Abehsera has reportedly agreed to purchase the Baldwin Hills Crenshaw Plaza from its current owner for $110 million, severely outbidding a coalition of community groups determined to preserve Crenshaw’s economy via Black ownership and affordable housing.

Moreover, the Downtown Crenshaw Rising – a group that submitted a $100 million initial bid – believes the bank handling the sale never took their offer seriously from the start, going as far as preventing them from making an even more competitive offer on the property.

Goodman told LA Focus that he plans to have regular demonstrations outside Abehsera’s home. Sunday’s protest was the second one of its kind. Last Thursday evening Goodman’s Crenshaw Subway Coalition teamed up with BLM-Los Angeles and staged a surprise protest in front of Abehsera’s home.

But given that Sunday’s planned protest was posted on social media, the word must’ve got out about the march as the group was met with a heavy police and private security guard presence.

But some residence came out in support of the protest.

“We support the Crenshaw Subway Coalition efforts to stop their neighborhood from being gentrified,” Ellen Isaacs said.

Asked why some of the residents deemed it necessary to counterprotest.

“There are some orthodox Jewish neighbors in Beverwil who are very sensitive to what they perceive as intimidation and antisemitism. They think that holding a protest in front of [Abehsera’s] house is antisemitic.

“Oddly enough, she added, Beverwil is one of the neighborhoods that kept Black people out due to redlining. It’s simply racist, and that bothers me.”

Carol Head, another resident sympathetic to the protest said some of her neighbors would rather live in their bubble.

“There’s an element of people who want to protect their wealth and have no desire to see an equal playing field where everyone can enjoy the bounty of America. I think it’s horrible,” she said.

“I’m not going to let that happen on my watch,” Goodman said.

Abehsera did not respond to a request for comment for this story.