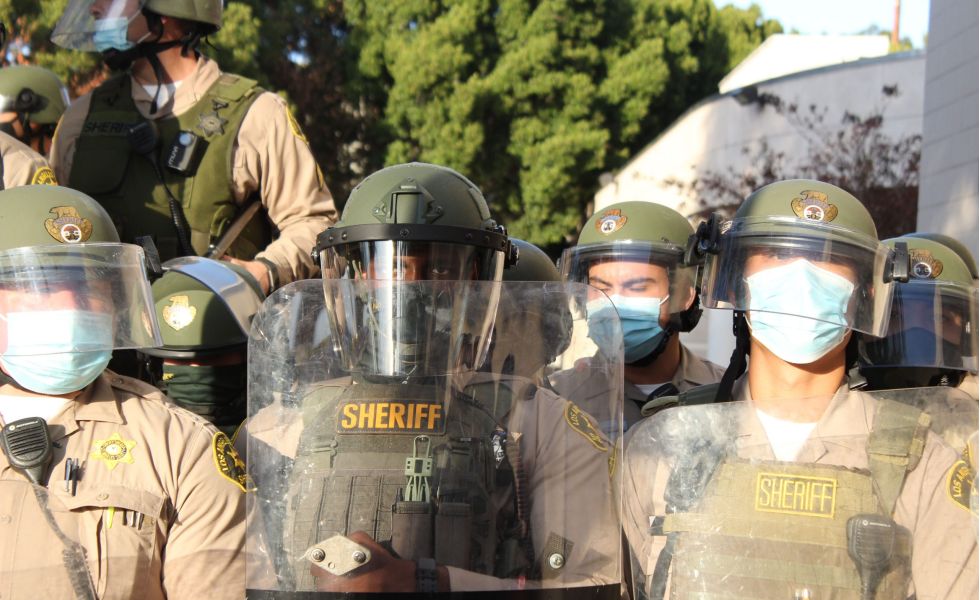 A violent gang of Los Angeles County sheriff’s deputies who call themselves “The Banditos” have planted weapons on victims to try and justify shootings of unarmed suspects, a deputy alleged in a recent CBS investigation.

“They operate as a gang. They commit crimes, they assault people,” the deputy said, adding that many of the recruits are looking to get a “shooting” as a way to gain initiation within the gang.

“If you get in a shooting, that’s a definite brownie point.”

The whistleblower, who remained anonymous for fear of reprisal, said the officers mostly consist of Latino deputies patrolling Black and Latino neighborhoods in East L.A.

John Sweeney—who won a $7 million lawsuit against L.A. County for the family of Donta Taylor, a 31-year-old Black man fatally shot by sheriff’s deputies in 2016—has been trying to raise the alarm on violent cliques in the L.A. County Sheriff’s Department for decades.

“These deputy gangs do exist. My goal was to expose it to the world,” Sweeney said. “And I knew that some decent people within the sheriff’s department would come forth and corroborate what I’ve been trying to prove for years.”

On Aug. 25, 2016, Samuel Aldama – one of the two deputies who shot at Taylor – were assigned to neighborhoods struggling with gangs when they encountered Taylor walking in an area controlled by the Cedar Bloc Pirus reportedly wearing attire commonly worn by those affiliated with the gang.

One of the deputies making the allegations against the Sheriff’s Department said the Banditos “do racially profile.”

Sweeney believes Taylor was killed in cold blood by the deputies that day.

During Taylor’s lawsuit, explained Sweeney, Austreberto Gonzalez, a former Marine and a sheriff’s deputy since 2007, confirmed allegations of a gang problem operating within the sheriff’s Compton’s division.

“We later found out,” “that their name was the Executioners”, said Sweeney of the 10 to 20 deputies who controlled a patrol station in Compton through force threats and intimidation.

An FBI probe investigating members deputies assigned to the Sheriff’s East L.A. station said sources with knowledge of the matter told agents about deputies who brand themselves with matching tattoos of a skeleton outfitted with a sombrero, bandolier and pistol.

Aldama admitted under oath to having a tattoo depicting a skull with a rifle and a military-style helmet emerging from flames. The letters “CPT,” for Compton, were on the helmet, representing the station where Aldama worked.

Another whistleblower corroborated evidence gathered in the FBI probe that deputies affiliated with gangs identify themselves with a tattoo.

Still, despite numerous allegations of deputy gangs revealed in the CBS report and various investigations, Sheriff Alex Villanueva has repeatedly denied the extent of a gang problem within the department, but at the same time says he has zero tolerance for deputy gangs.

“Any employee who aligns with a clique or subgroup, which engages in any form of misconduct, will be held accountable. I do not want you joining these alleged cliques anymore,” Villanueva said in a video on the LASD’s website.

His comments drew sharp rebuffs from Attorney Carl Douglas, who said Villanueva is deliberately misleading the public about the troubling pattern within the L.A. County Sheriff’s and its well-documented deputy gang problem.

“Anyone who denies the existence of gangs within the L.A. County Sheriff’s Department, like Alex Villanueva, is presenting false information to the public for his own self-interest. He knows in his heart that gang culture is a serious problem,” Douglas said.

Recently elected Los Angeles County District Attorney George Gascón, said his department takes any allegations of gangs within law enforcement seriously – a departure from his predecessor who failed to prosecute law enforcement officers in cases involving the use of force.

“If, in fact, we believe that there is criminal activity within the sheriff’s department then we will deal with it accordingly,” Gascón has stated.

But the president of the San Fernando Valley NAACP,  James Thomas, a professor at Cal State L.A. and Clergy member for Black Lives Matter, said that while Gascón may mean well, he’s fighting an uphill battle.

“Gascón has done a lot since he took office. But these police associations and the D.A., along with Trump’s America, have come together as a trifecta to do whatever they must to make sure that he can’t accomplish any of his goals”.

“Every day, police departments prove why they need to be defunded, because there’s no way you can reform this kind of ideology, no more than you could reform slavery,” Thomas continued. “The institution of slavery could not be reformed; it had to be abolished. And this institution of policing has to follow that same course”.