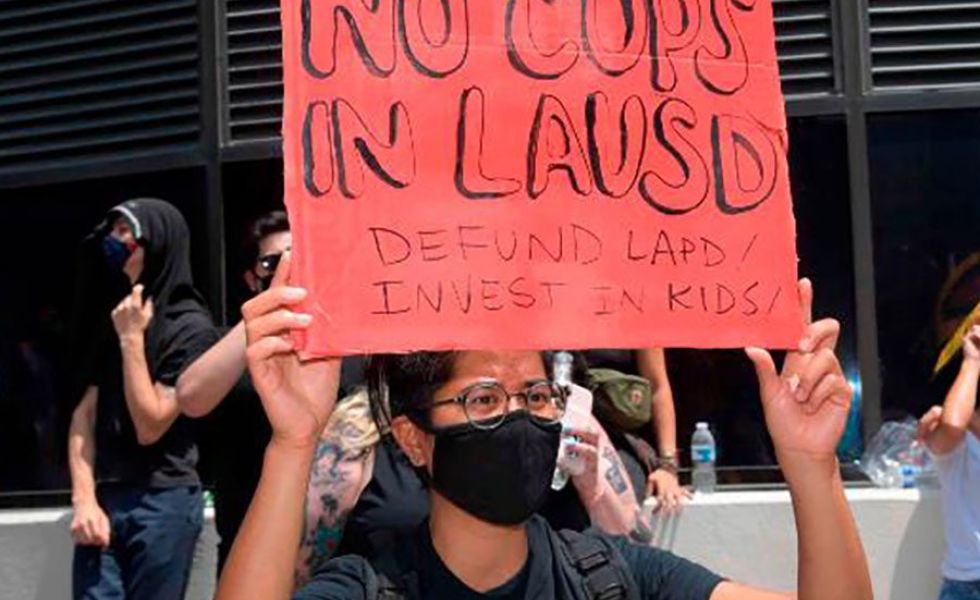 On Tuesday, activists and community members secured a historic win in the fight against the Los Angeles Police Department in Los Angeles Unified Schools.

After months of delays, the L. A Unified School Board unanimously approved a plan that cuts $25 million from the school police budget and diverts it to the Black Student Achievement Plan, eliminates 133 positions (one-third of its officers), and bans the use of pepper spray on students.

The school board had narrowly approved the 35 percent reduction of LASPD’s budget in a 4-3 vote last July. However, exact details on how to redirect the money and implement the new budget had been difficult to establish.

Under the approved plan, all of the $25 million will go to the Black Student Achievement Plan, a $36.5 million plan to support Black students by hiring “climate coaches”, social workers, and other support staff. The Achievement Plan also promises to overhaul the curriculum and instruction in LAUSD schools.

“This plan enacts a long-standing community demand for Counselors not Cops, and is a first step towards replacing school police with more effective strategies for student safety,” the coalition of student activists and advocacy groups said in a statement. “This victory is a crucial step towards mitigating the years of disinvestment and ending the criminalization and over-policing of Black students and students of color in LAUSD.”

The campaign had said officers in schools disproportionately target Black and Latino students. A poll commissioned by the district found general support for school police’s presence on campuses but showed that only 35 percent of Black students felt safe with officers in school.

“I am excited by the Board’s opportunity to actually spend that money in ways that I, my peers, and the community at large have expressed time and time again,” said Student Board Member Kamarie Brown. “Our students have spoken, and the same message rings true. I hear the students. Police do not equal peace. Police do not equal safety. On the contrary, police and the culture of policing that runs across staff, faculty and administrators is one of the longest standing contradictions of education Black students in LAUSD.”

“The LASPD’s commitment to remain focused on supporting the District and providing safety-related services that support student achievement and positive outcomes is paramount. We have already initiated our plans to implement a service model and deployment strategy that aligns with protecting our school communities based on reforms that limit on-campus uniform presence,” said LASPD Chief Leslie Ramirez.

“Although LASPD was not part of the decision-making relative to the new policy recommendations that were announced today, we feel the proposed policy language has potential liabilities, lacks clarity, and will result in unintended consequences impacting the safety of students and staff.”